The 2020 Junior Book Crew Take Us on Shelf Tours

The young bookworms of our 2020 Junior Book Crew consider their books as some of their most prized possessions. We asked them to show us around their shelves, tell us the stories of each part in photos and talk about their favorite reads on them. Keep reading to find out what they are.

Hello! This is my shelf tour! I hope you enjoy it. It’s actually quite small but I’ve divided my shelf with 3 levels. 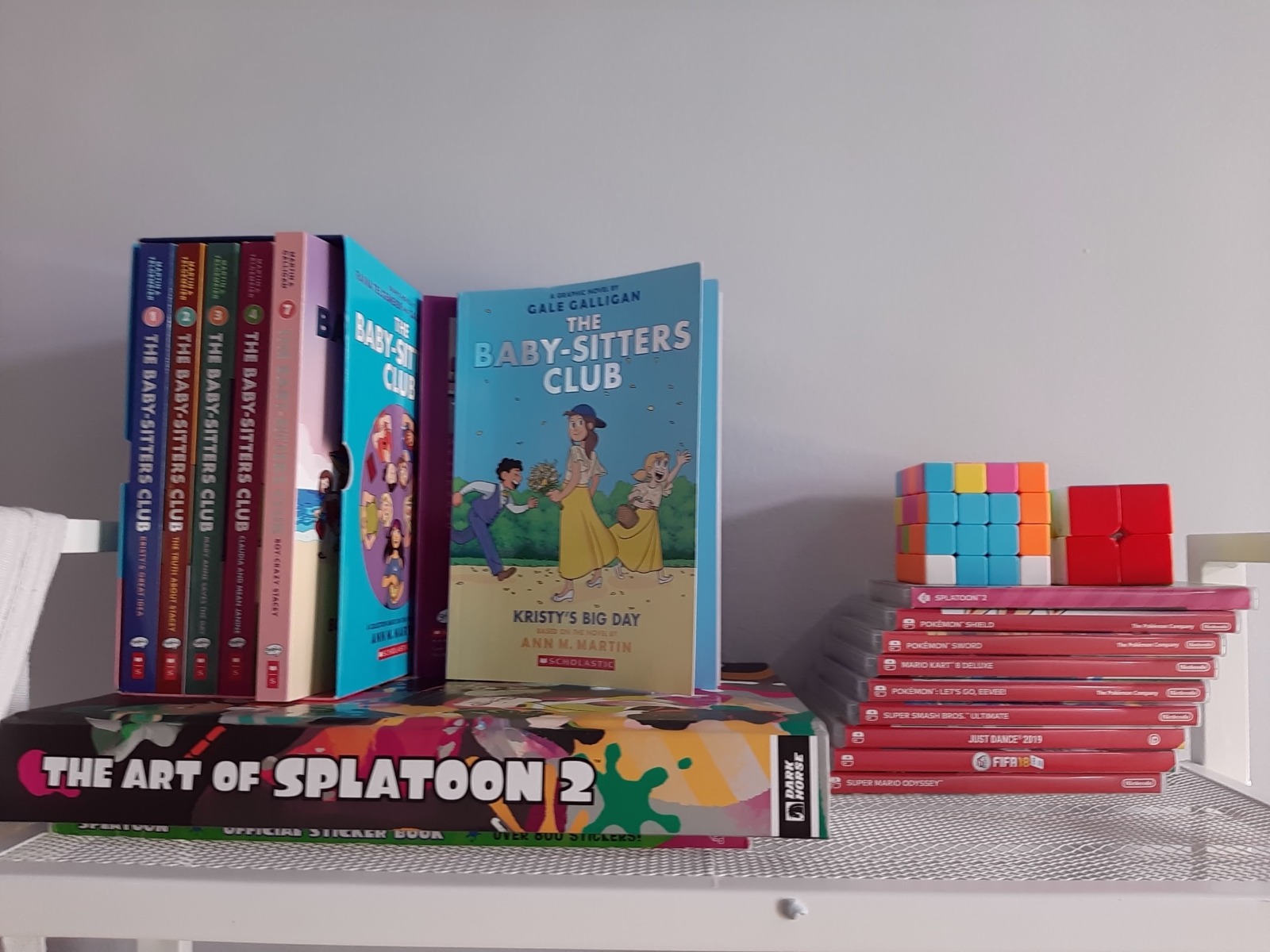 The Favorites. The top half of my white shelf holds my most valuable items. Everything on it (without the Rubik's cubes) are valuable to me. I have the Babysitters Club by Ann M. Martin and Illustrated by Raina Telgemeier and Gale Galligan, The Art Of Splatoon 2 (my second favorite video game), and actually I was supposed to put my Rick Riordan collection on that shelf but I ran out of space so instead I put my video game cases. 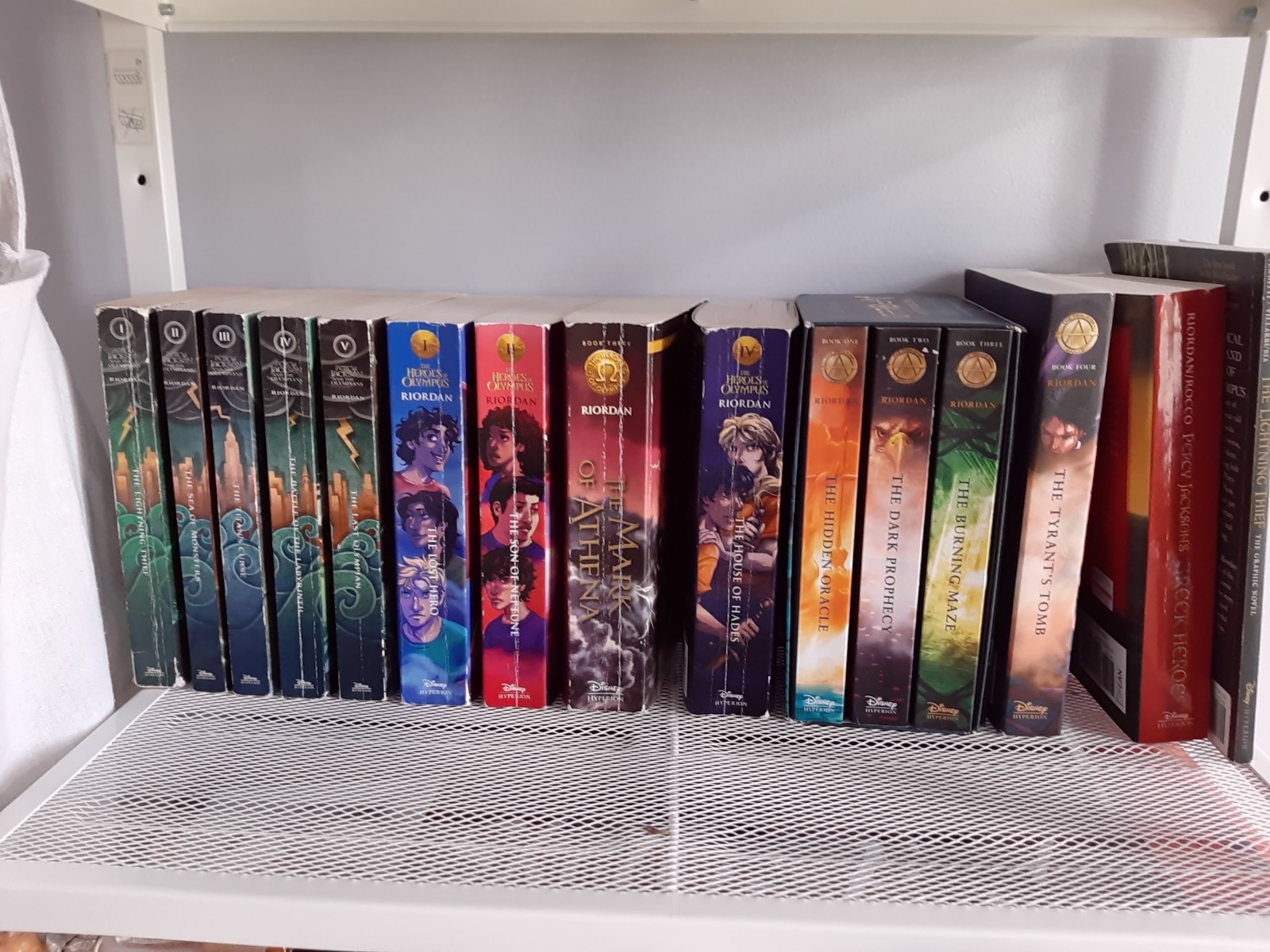 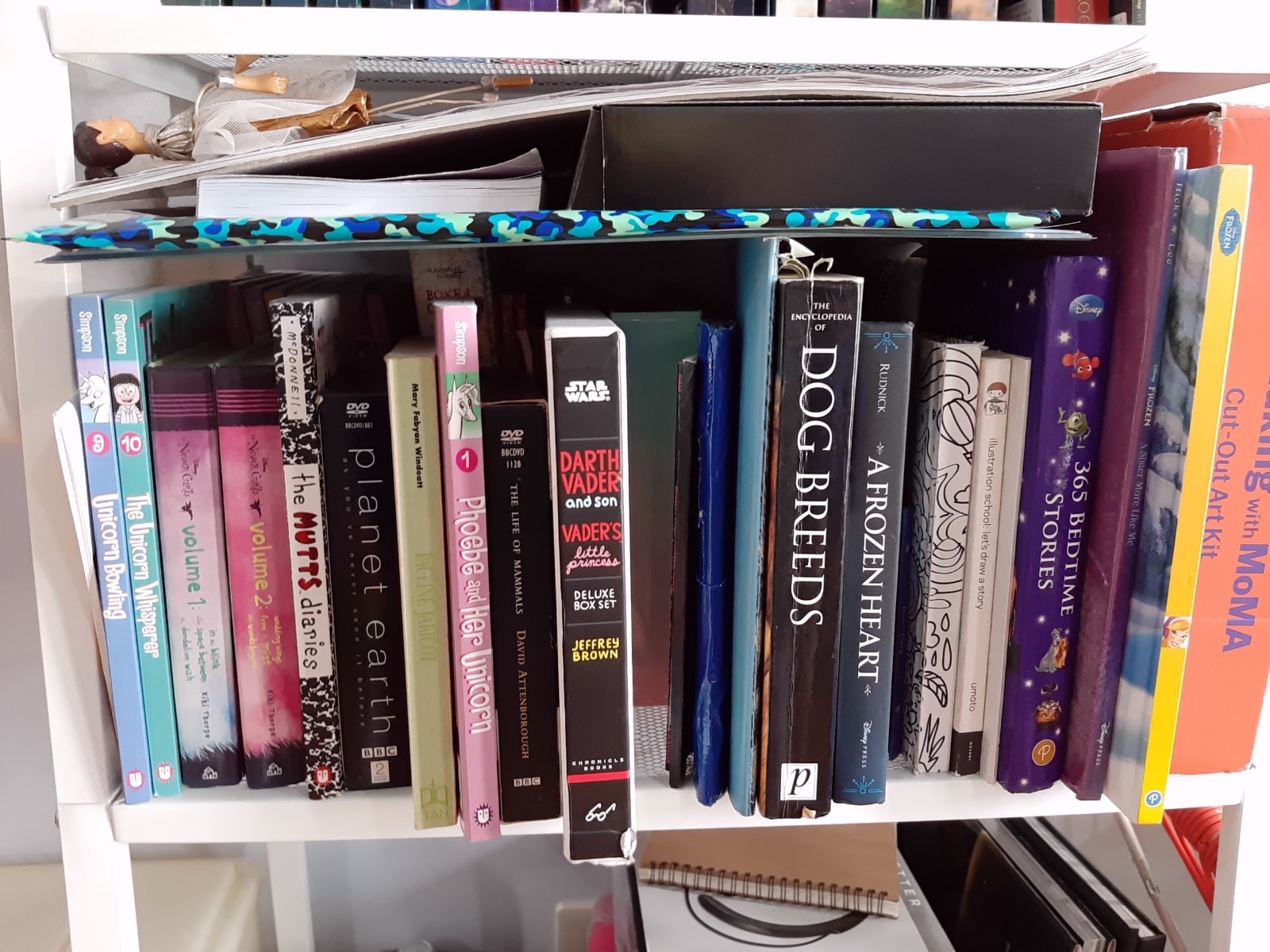 This section has no particular organization actually. I just put the books that I want to keep in my room there for storage. Whatever book I might read later on or that I like but doesn’t really belong at the favorites section goes there. I don’t just put books there though. I also have a digital drawing gadget and a self-made board game.

My favorite books are The Art of Splatoon 2, The Trials of Apollo: The Tyrants Tomb, The Babysitters Club: Kristy’s Big Day, Heroes of Olympus: The House of Hades and Splatoon: Volume 7. The Art Of Splatoon 2 is  basically artworks of the video game and facts about it. I got it for Christmas last year at Fully Booked. The Trials of Apollo: The Tyrant's Tomb is about the God Apollo being punished by Zeus and made mortal to retrieve 5 lost Oracles. This is based on Greek Mythology. The Heroes Of Olympus: The House Of Hades is about 5 Demigods (children of the Gods and Humans combined) have to travel through the House of Hades in Epirus, Greece to close the Doors of Death and bring back 2 of the demigods to the mortal world. The Babysitters Club: Kristy’s Big Day is about Kristy, a 12 year old babysitting 14 kids with her club in preparation for her mothers wedding. Lastly, Splatoon Volume 7 is about stories made by the game company about the game.

That’s it about my complete shelf and favorite books. Thank you! 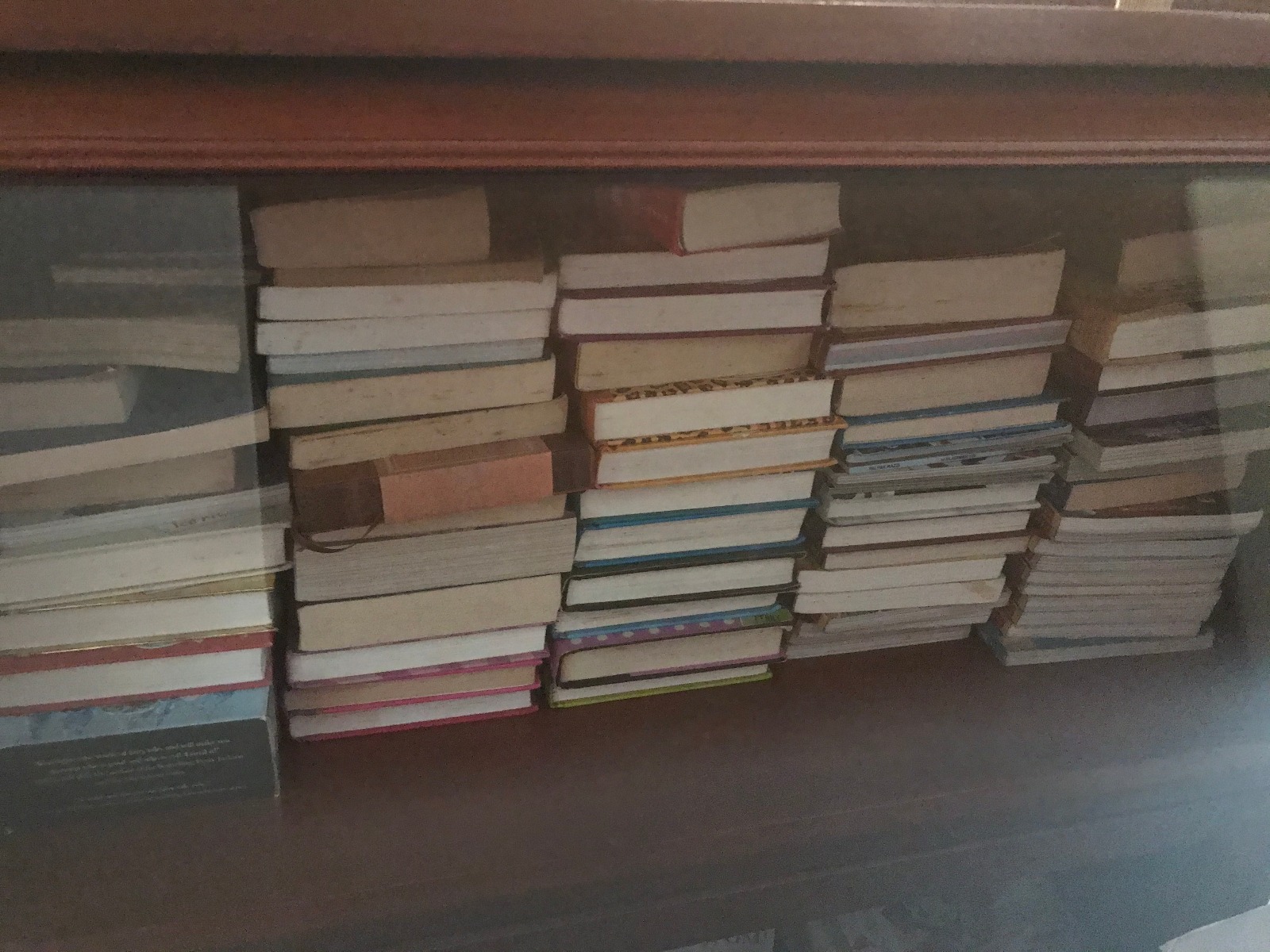 My bookshelf is full of nostalgia. It has a collection of series that I used to collect when I was younger. Diary of A Wimpy Kid, Dork Diaries, etc. I call it, The Bookshelf of The Past. Because I like to hold on dearly to things that remind me of my youth. 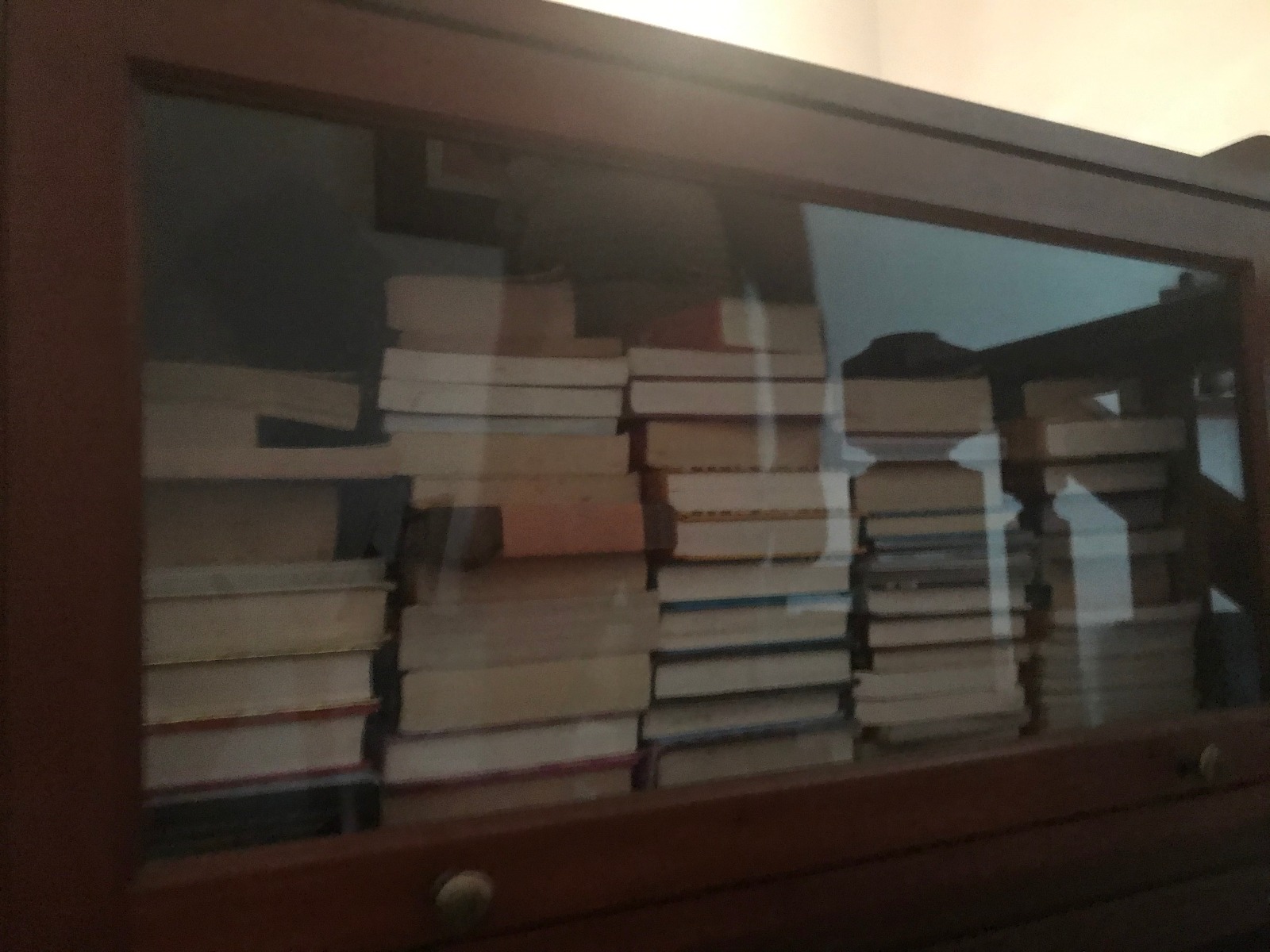 The five select books I chose are O.C.W. (written by Carla M. Pacis), The Wishing Spell (written by Chris Colfer), The Reader (written by Traci Chee), The Book Thief (written by Markus Zusak), and The Girl Who Could Fly (written by Victoria Forester). The reason I chose these books is when I read all of these fantastic stories, I'm drawn into their world and I could imagine all of the sequences happening as if they were movies. I invest myself in their stories that the real world fades away, and I'm transported into the world that the books were in. 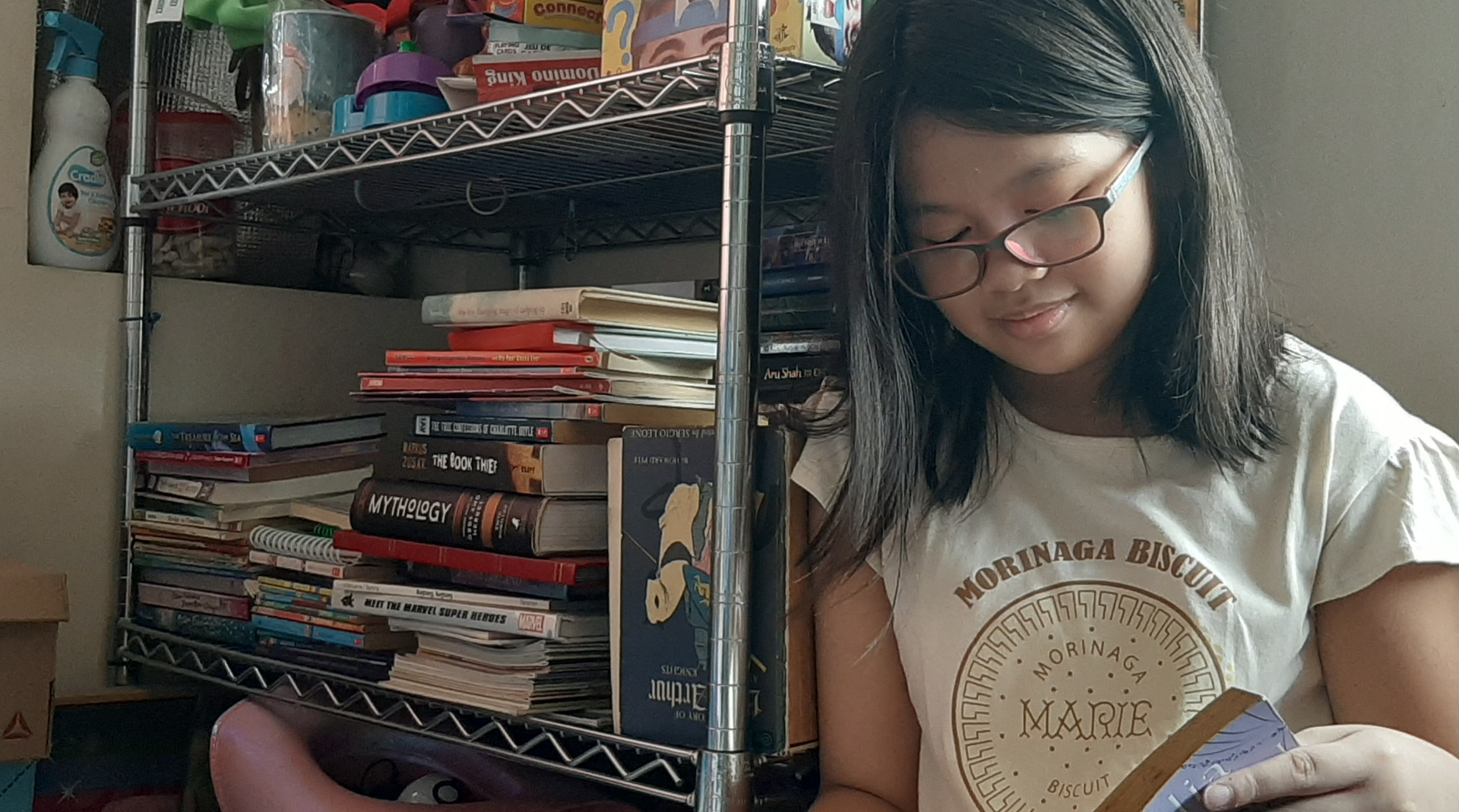 As you can see, my bookshelves are...messy. But I love it anyway, because it is the home of some of my favorite books- Hunger Games, Harry Potter, Percy Jackson and the Olympians, Miss Peregrine's Home for Peculiar Children, and The Book Thief. 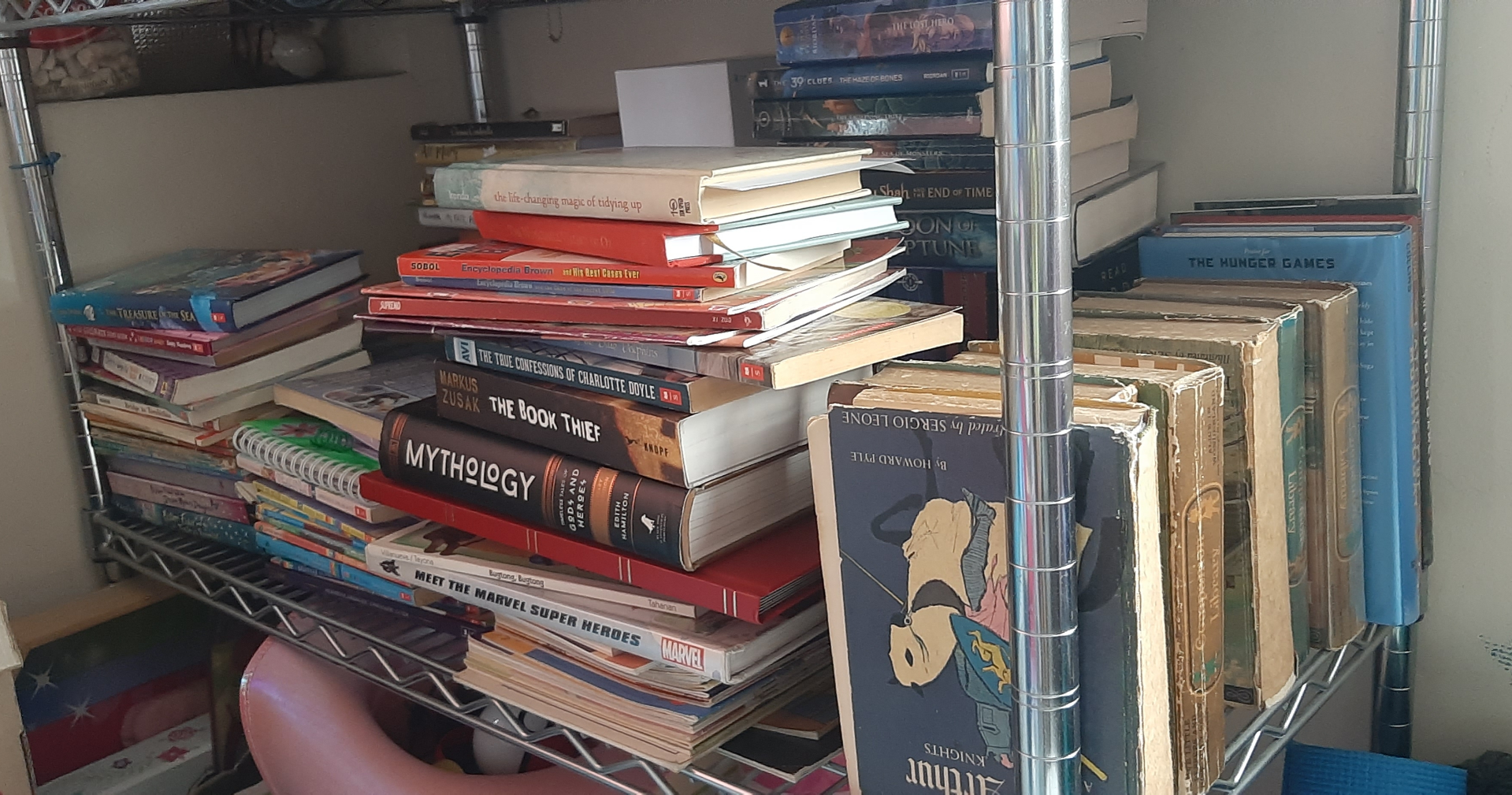 These books... I love them because they remind me that magic and impossible fantasies exist, hidden somewhere underneath the bleak realities of our world. They lend me a sense of giddy exhilaration as I follow Katniss through the future republic of Panem, Harry through the glorious Wizarding World that has swept the corners of the globe, Percy through the confusing and, at times, dangerous world of myth, Jacob through the literal history of Peculiardom, and Liesel through the horrors and experiences that come from living in a war.  And it's euphoric. 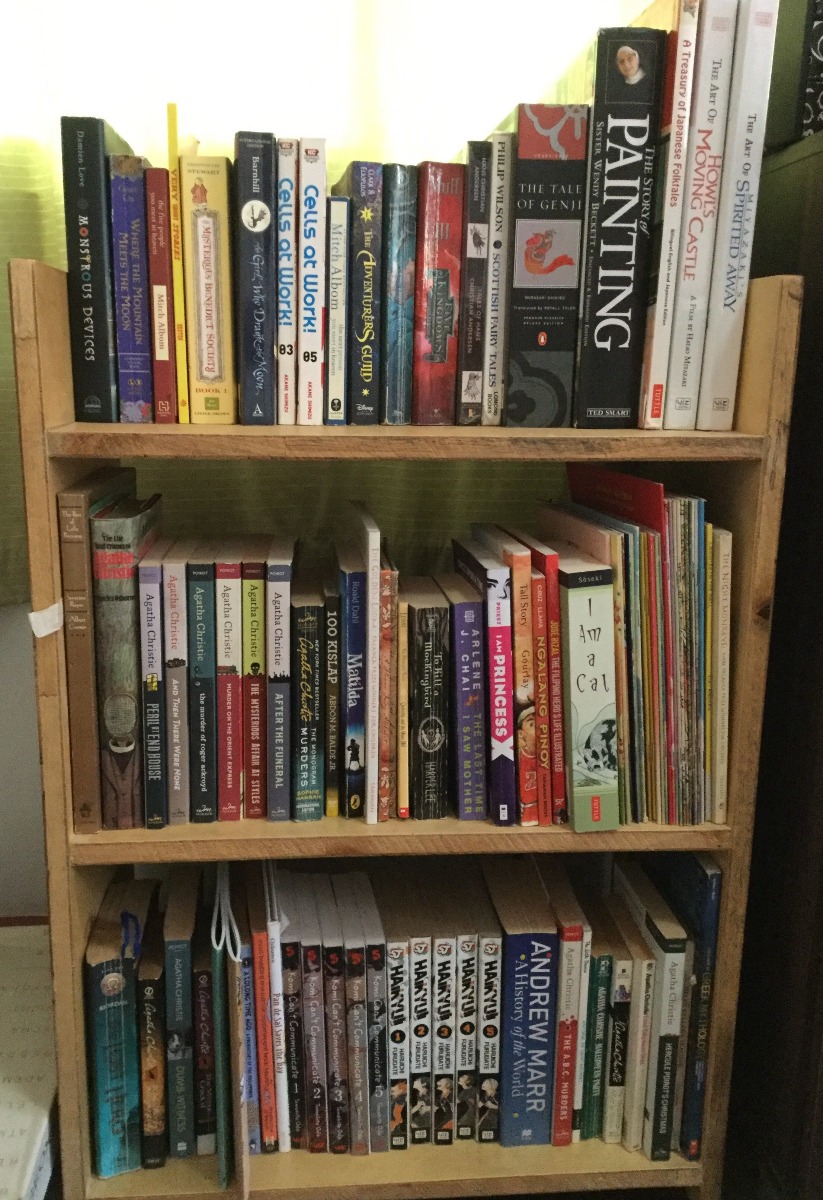 My bookshelf can be best described as diverse. I tend not to stick to one genre of books or book format. The bottom of row of my bookshelf sports a collection of manga, Agatha Christie murder mysteries, 1 minute mysteries, 2 history books, a Greek mythology collection, The Little Prince, and Rick Riordan’s Lost Hero. The second row is more diverse. As well as having its share of Agatha Christie novels, it contains children’s alamats, poetry books, a collection of Lola Basyang’s stories, and compiled Philippine short stories such as 100 Kislap, The Night Monkeys, and The Golden Loom, to name a few. Roald Dahl’s Matilda, Harper Lee’s To Kill a Mockingbird and Soseki Natsume's I Am A Cat can also be found here. Finally, the top row has 2 Ghibli art books, the world’s first novel, The Tale of Genji, Sister Wendy Beckett’s The Story of Painting, compiled stories by Hans Christian Anderson, Scottish Fairy tales, fantasy-adventure novels, Cells at Work! manga, and my top 5 novels, which I will get to. 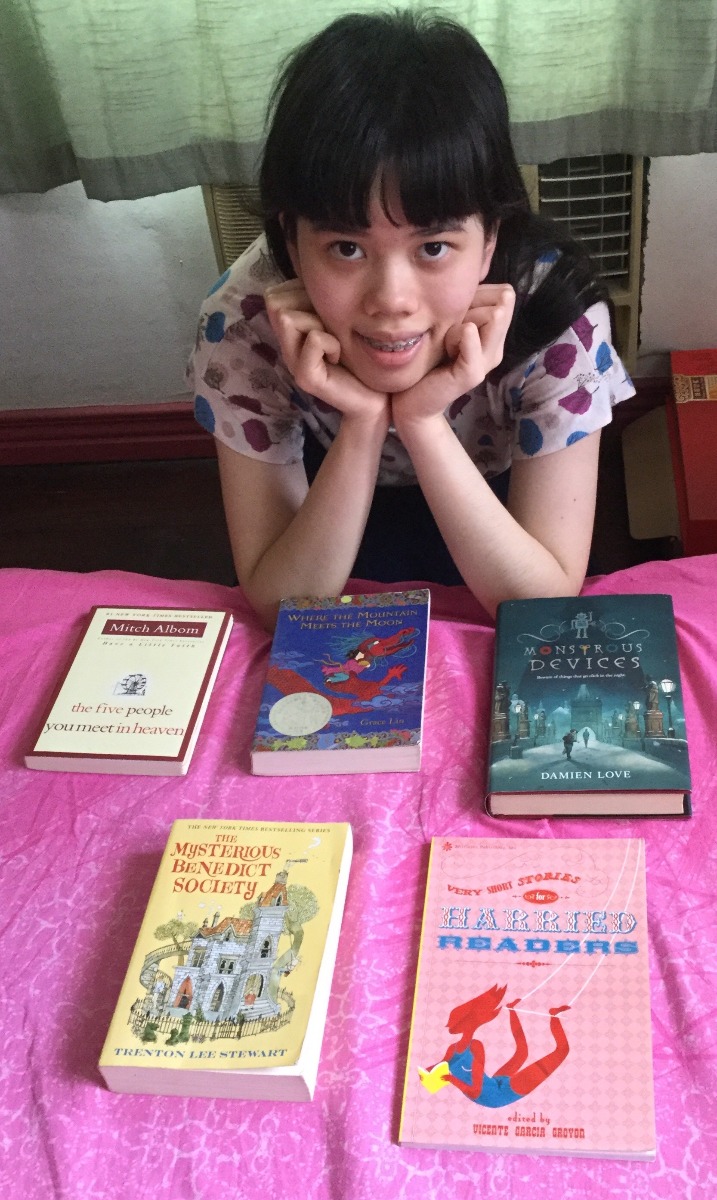 My favourite books are Mitch Albom’s The Five People You Meet in Heaven, Grace Lin’s When the Mountain Meets the Moon, Damien Love’s Monstrous Devices, Trenton Lee Stewart’s The Mysterious Benedict Society, and Very Short Stories for Harried Readers edited by Vicente Garcia Groyon. All of them are of various genres, but are all must reads. Here’s why:

Mitch Albom’s The Five People You Meet in Heaven is a timeless novel that deals with the harshness and complexities with life. Forgiveness, war, and child abuse, are just a few of the issues I can name. Everything about this book made it stand out. A bitter old man as a surprisingly heartwarming, unconventional protagonist, a plot kickstarted by said protagonist’s death, and even the concept of heaven presented in the book. Most importantly, it manages to capture the heart of readers with its beautiful message and story.

Grace Lin’s When the Mountain Meets the Moon is a John Newbery Medal Winner, which speaks for itself. While having a strong, quick witted female protagonist, and a beautiful, colourful fantasy world, what really makes this book shine is its format. Smaller myths and mini stories scattered throughout the book slowly come together to form a stunning conclusion to Minli’s hero’s journey that had me rereading it again and again.

Damien Love’s Monstrous Devices was a delightful surprise. When I first read this book, I couldn’t put it down. A dark fantasy-adventure with a touch of modern and mystery, it was fast paced and exciting, yet didn’t feel rushed. The chase scenes were well paced, the prose was well written, the places and characters felt so alive. The concept, especially, that shaped the conflict in this book was so unique. But what I personally liked in this book is that it didn’t fully explain everything, and left some things at heavily implied, which is uncommon for most adventure books. It left me thinking and let me draw my own conclusions.

Trenton Lee Stewart’s Mysterious Benedict Society was an interesting mystery novel. It’s strength is in its characters, with mysterious villains, engaging protagonists facing off in a complex sabotage spying game. Witty and clever, it is always fun to reread.

Very Short Stories for Harried Readers is not a novel, but boasts a collection of some of the most interesting Filipino short stories. Each one conveys various twisted or beautiful worlds with twists and emotions that leave you reeling or thinking deeply.

That’s it for my tour! Thank you for reading! 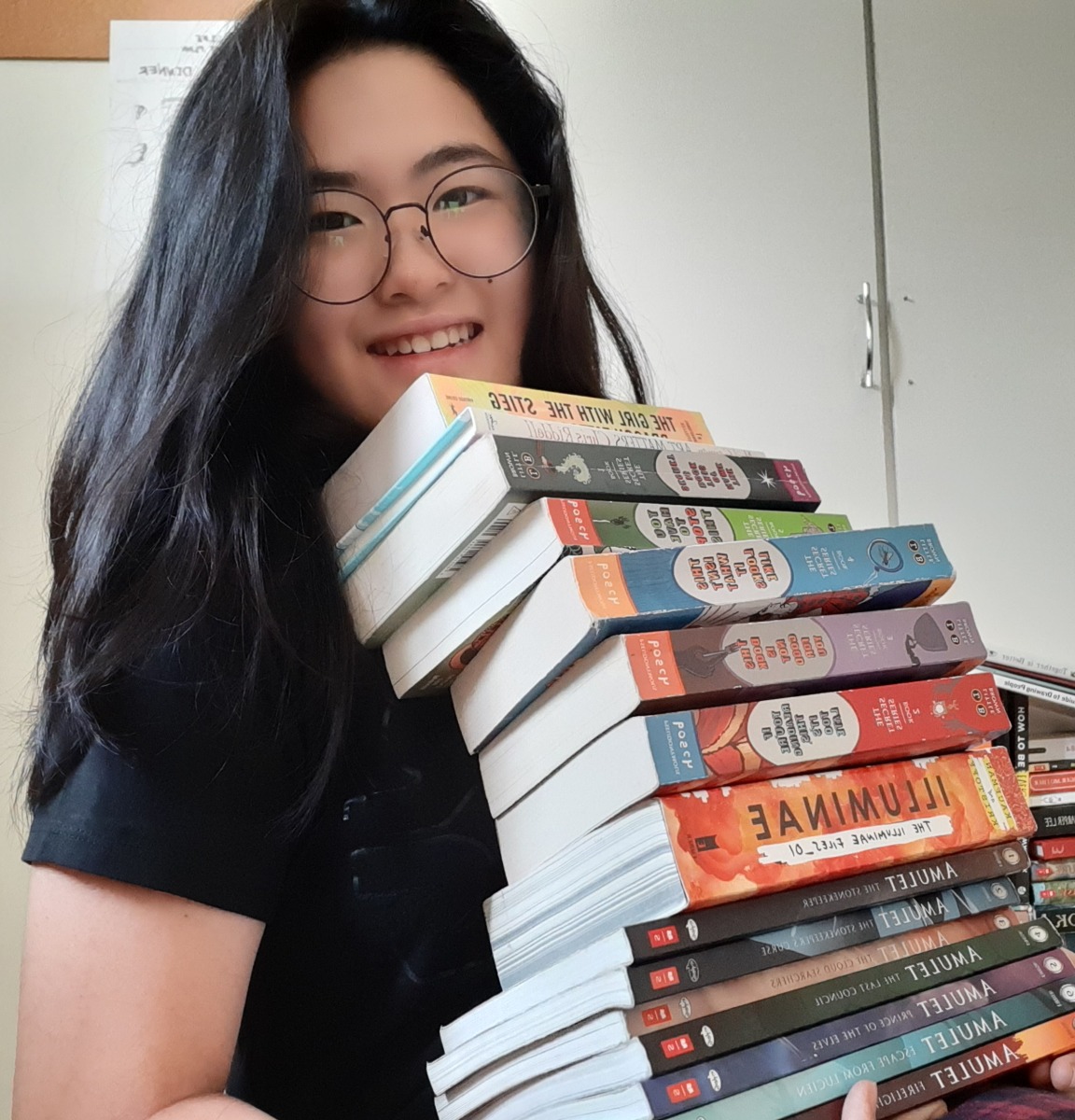 My bookpile is just a stack of wonders and chaos, it either all holds together while you read or plops down to a chaotic mess.The books that are stacked are all very difficult to grab and go.Yes I should get a bookshelf(someday) but to me this stack has a 2 in 1 use. Number 1, it stops me from reading too much because I have to clean but secondly its my goal/inspiration.The stack shows me as a person,how I should never give up because no matter how many times it falls I should always rebuild and get better. 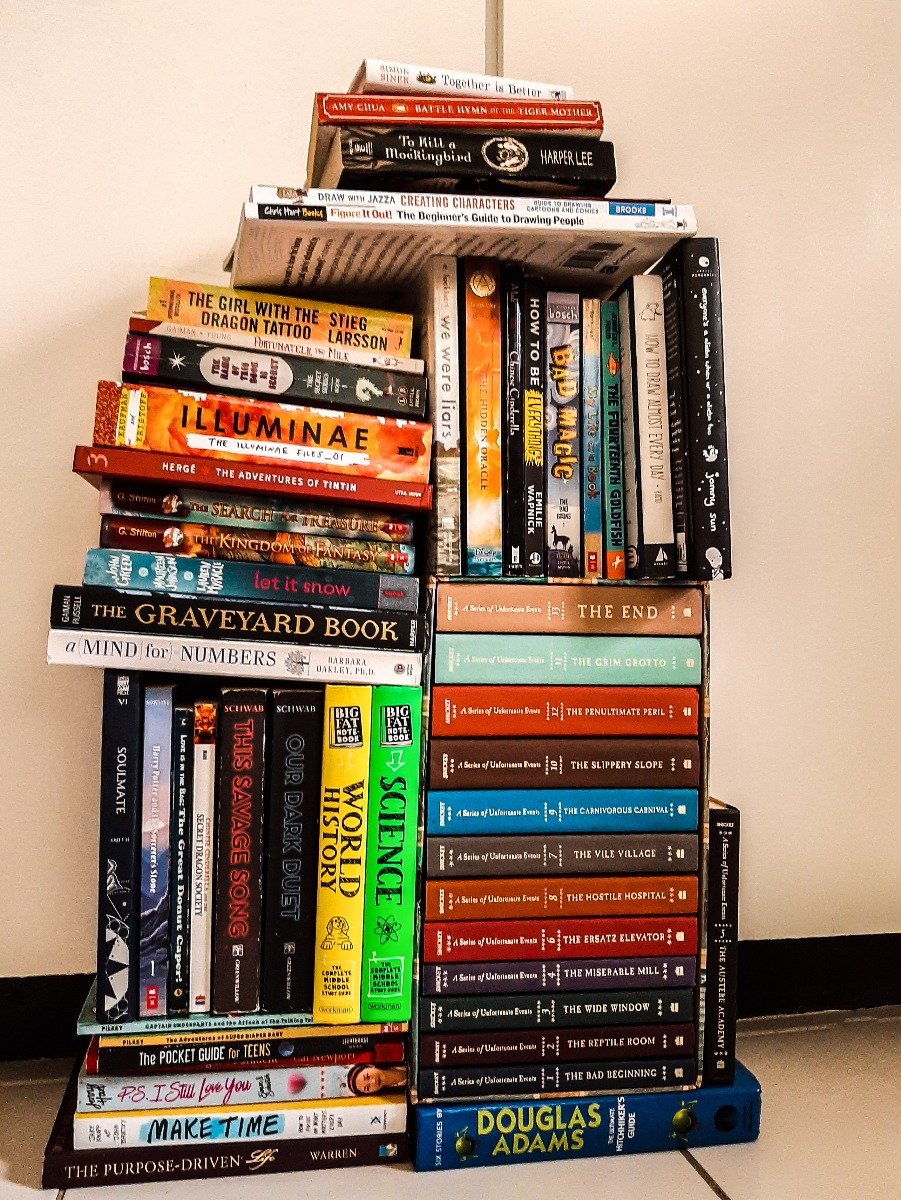 It is a graphic novel series,that is very easy to read and entertaining because of the beautiful world, memorable characters, vivid pictures and most of all a storyline that will get you hooked by the flip of the 3rd page. It's the book that opened my eyes to the book world, and its the kind of books I want to write.

It is hands down (for me) the hand book for writers, because it shows you how difficult it is to become one and how fun it is to be one. It shows the ups and downs you'll face without sugar coating. This book is the only one I cant stop rereading, because when I feel alone, judged and in a writers block in the wrong time of day. This cures it all by opening my eyes to the goal,becoming the best I can be (a writer or not.)

The Secret series by Pseudonymous Bosch

This book is the 1st one I've read of its kind, the kind that talks to its readers and makes you feel truly part of the journey of the characters without giving anything away instead making you wonder what happens next. I actually only read this because I saw someone read this in school and I wanted to know the person— but anyway, I actually really loved it that I forgot to talk to the person about it.

The Girl with the Dragon Tattoo by Stieg Larsson

This is the book where you hide under the covers with a flashlight in your mouth at night.The storyline will just keep you on the edge of your seat, thinking about what will happen next. It's just that good. It's actually the last book I bought (including some others) before COVID so it has some sentimental value but the quality of the writing was superb.

Mixed media book about a space colony trying to survive with a hack in their life-supporting A.I., and the only one that can help is one girl and her ex. The storyline is unpredictable, Ive always had an easy time predicting plots in books but this one was just impossible, making it even harder to put down. 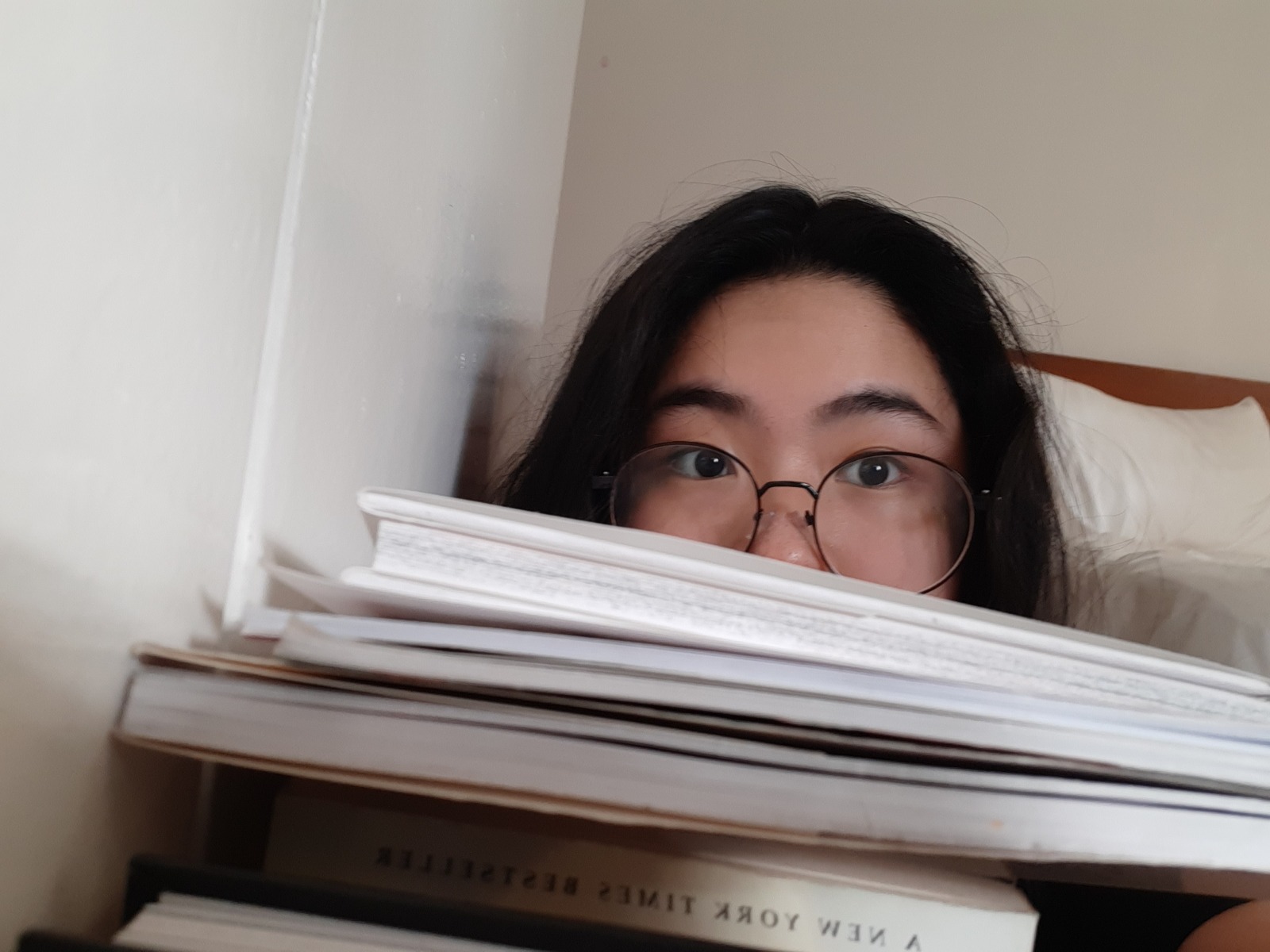 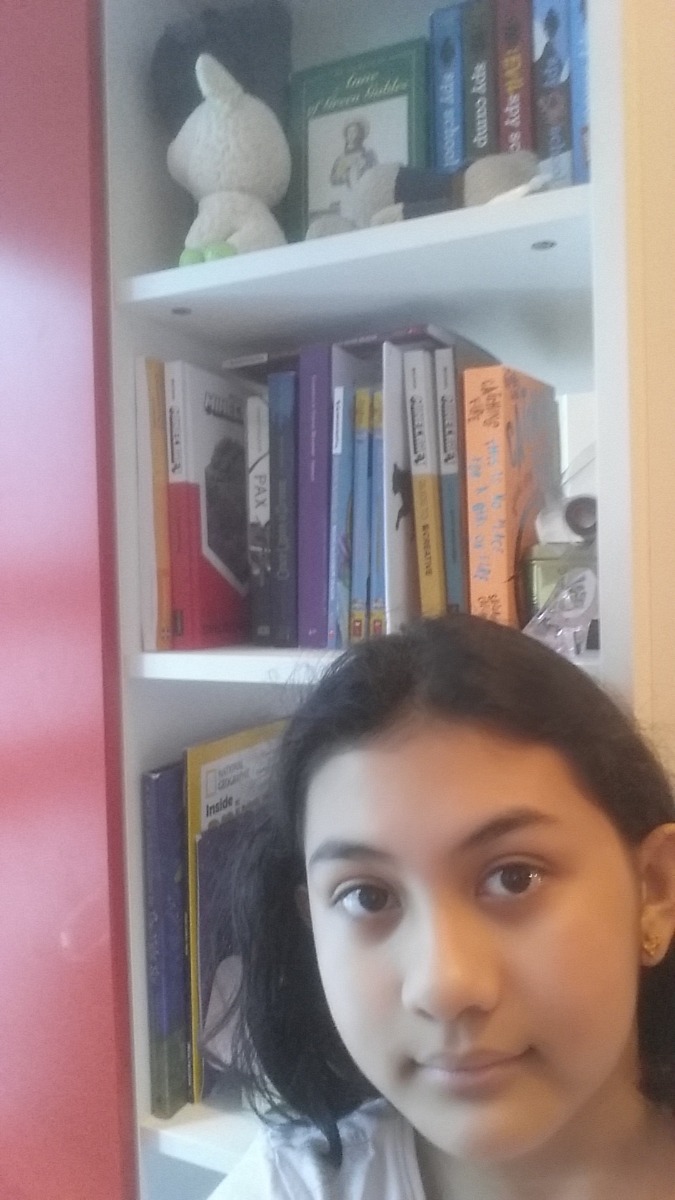 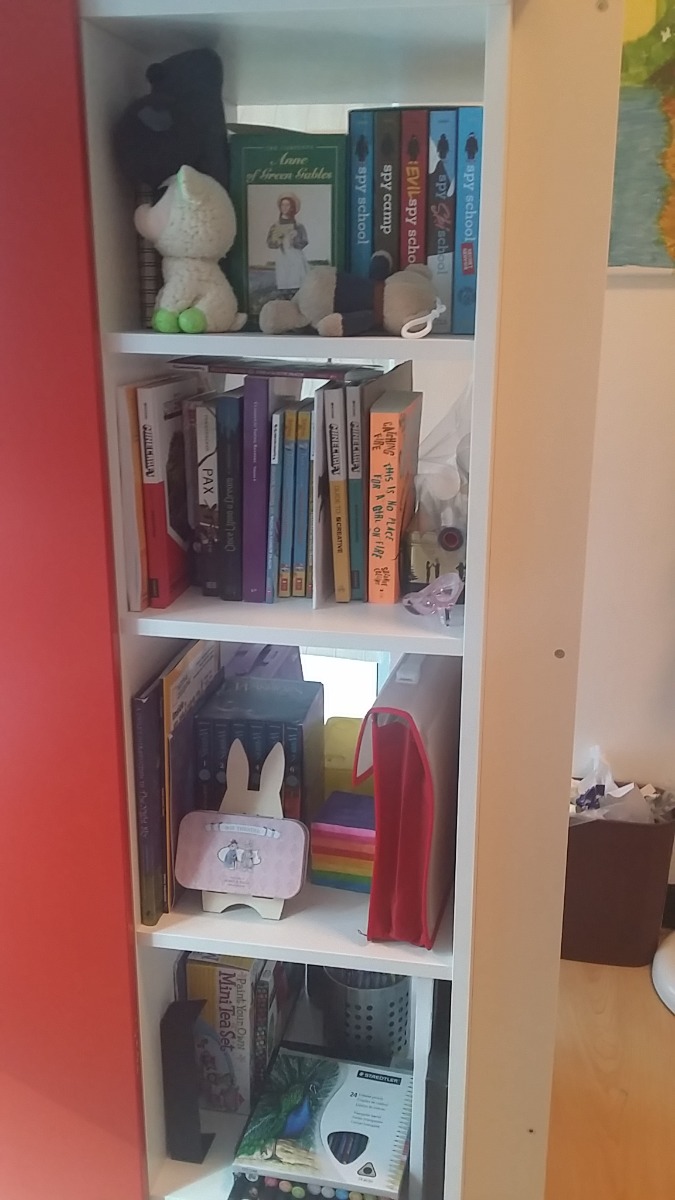 My bookshelf can get messy, but I try to keep it clean. I used to have a much larger collection of books, but that was before I moved to live here in the Philippines. The books I chose mostly have talking animals as their main characters. They're more interesting to me, because talking animals are least likely to happen in real life, and I enjoy magical stories such as Harry Potter. 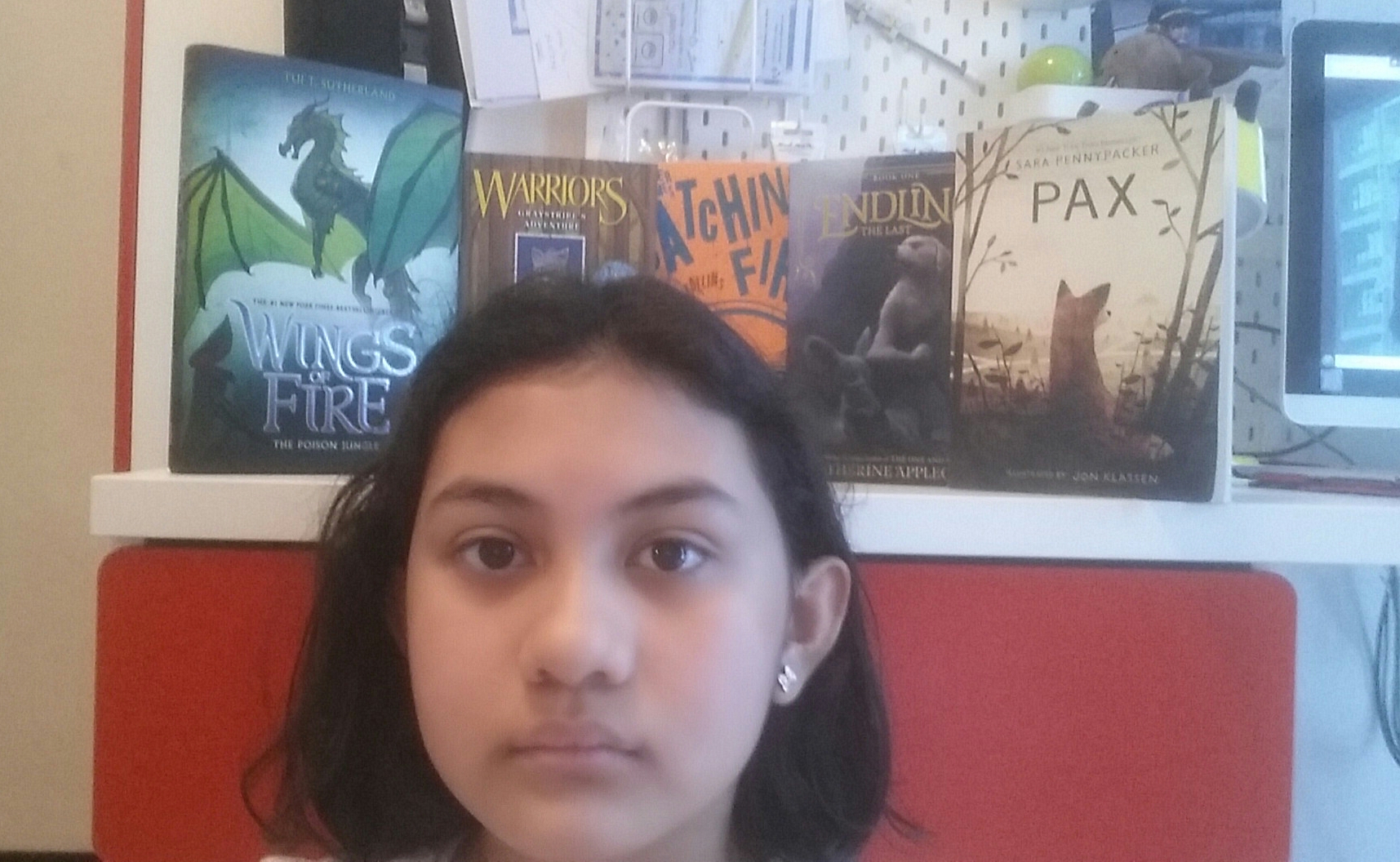 These five are my favorites because they are ones that I could read over and over again.

And that's all from our Junior Book Crew bookworms' shelves. Did you see any of your own favorites in their shelves? Share your own shelf at Bookworm Corner at Fully Booked.