Some of the bookworms over at our Facebook community, Bookworm Corner at Fully Booked, shared with us their encounters of the works of Japanese author Haruki Murakami.

What was the first Murakami book that you’ve read?

JED: I picked up my first Murakami—the short story On Seeing the 100% Perfect Girl—in The Elephant Vanishes as a required reading in our English 10 class in UP Diliman back in 2003.

ERA: Norwegian Wood was the first Murakami book I've read. Some bookworm friends said I should have started with Kafka On The Shore but many have attested to the latter's complexity.

JILLANIE: Norwegian Wood. I've been seeing good stuff about it way back college days but strangely whenever I visit bookstores nearby, stocks are all out.

What made you pick it up or try Murakami?

ERA: I discovered Murakami in college. He was mentioned in one of my English minor subjects (World Literature) by a classmate and out of curiosity, I asked her about him and his books. She said that If you're into chance encounters with magical realist undertones, check out Haruki Murakami.

Before my flight back to Manila, I had a car accident in the said foreign country. And my tail bone detached from the rest of my spinal chord. Cringe worthy. I know. I resigned from my job to focus on my physical and mental recovery. Frequent hospital appointments and long queues, Kafka Tamura joined me in my path to recovery. His words resonated my pain, anguish, terrors, and existential ennui. When I flipped pages after pages, I was no longer in line, waiting for my turn to see the doctors or therapists—I was in a library with Kafka, unfolding mystery after another. I was talking to cats! Fish was raining down from sky; good thing I brought my umbrella.

When I closed the book upon finishing, I felt the heartache of goodbye. And I know I would not stop with Kafka Tamura. I wanted more.

JILLANIE: I read more book reviews and plots and understood why he became one of the well-received Japanese authors. I also admired how he imposed discipline on himself for writing. I only read about it online a long time ago before I had a copy of What I Talk About When I Talk About Running.

EMIL: I've been hearing about Murakami for a long time now, and since Japanese culture is something of interest to me and being the bookworm that I am, I decided to finally get myself a copy of one of his books. The rest as they say is history.

What do you like about Murakami’s writing style or thematic explorations?

JED: My favorite Murakami is a coin toss between Norwegian Wood and South of the Border, West of the Sun.  His themes—jazz, wells, whisky, infidelity, loneliness, isolation, and coming to terms with the past and lately, ageing, are timeless issues of the existence and coping in a distinctly Japanese setting in the modern world, resonate with people who are confounded with these very same issues (in one bizarre form or another) throughout our lives.
Murakami’s genius lies in his ability to blend the mundane with the surreal using accessible writing and heartfelt reflections on the human condition.

ERA: I like Murakami's imaginative yet conversational style of writing. He makes use of simple words but the way he constructs these adds depth in his themes which revolves around people struggling with their loneliness and longing.

ANGELA: Haruki Murakami used simple words (devoid of pretentious jargons) to talk about the profound and complex human identity. Articulate as I strive to be, he was able to put into words almost all the things I can only feel.

JILLANIE: Murakami simply detaches his reader from the real world and augments him to another world, where anything is possible.

EMIL: Murakami's style is difficult for me to define, his blend of romance with fantasy and adventure is spectacular. His imagination is limitless and mind boggling.

Some photos from our bookworm friends: 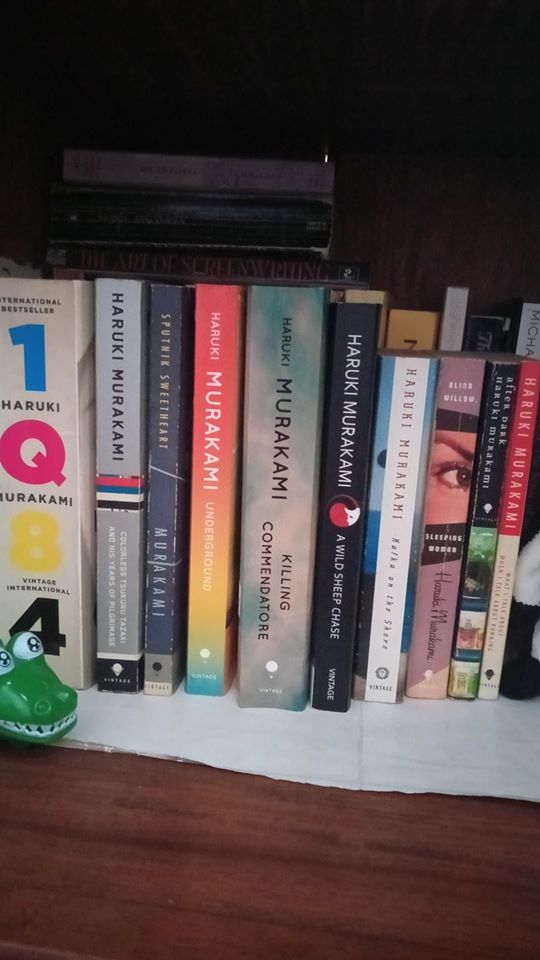 You can find more bookworm encounters at Bookworm Corner at Fully Booked Online. Stay tuned for more coming soon on the blog.