First Few Pages: This May End Badly by Samantha Markum

Pranking mastermind Doe and her motley band of Weston girls are determined to win the century-long war against Winfield Academy before the clock ticks down on their senior year. But when their headmistress announces that The Weston School will merge with its rival the following year, their longtime feud spirals into chaos.

To protect the school that has been her safe haven since her parents’ divorce, Doe puts together a plan to prove once and for all that Winfield boys and Weston girls just don’t mix, starting with a direct hit at Three, Winfield’s boy king and her nemesis. In a desperate move to win, Doe strikes a bargain with Three’s cousin, Wells: If he fake dates her to get under Three’s skin, she’ll help him get back his rightful family heirloom from Three.

As the pranks escalate, so do her feelings for her fake boyfriend, and Doe spins lie after lie to keep up her end of the deal. But when a teacher long suspected of inappropriate behavior messes with a younger Weston girl, Doe has to decide what’s more important: winning a rivalry, or joining forces to protect something far more critical than a prank war legacy.

This May End Badly is a story about friendship, falling in love, and crossing pretty much every line presented to you—and how to atone when you do. 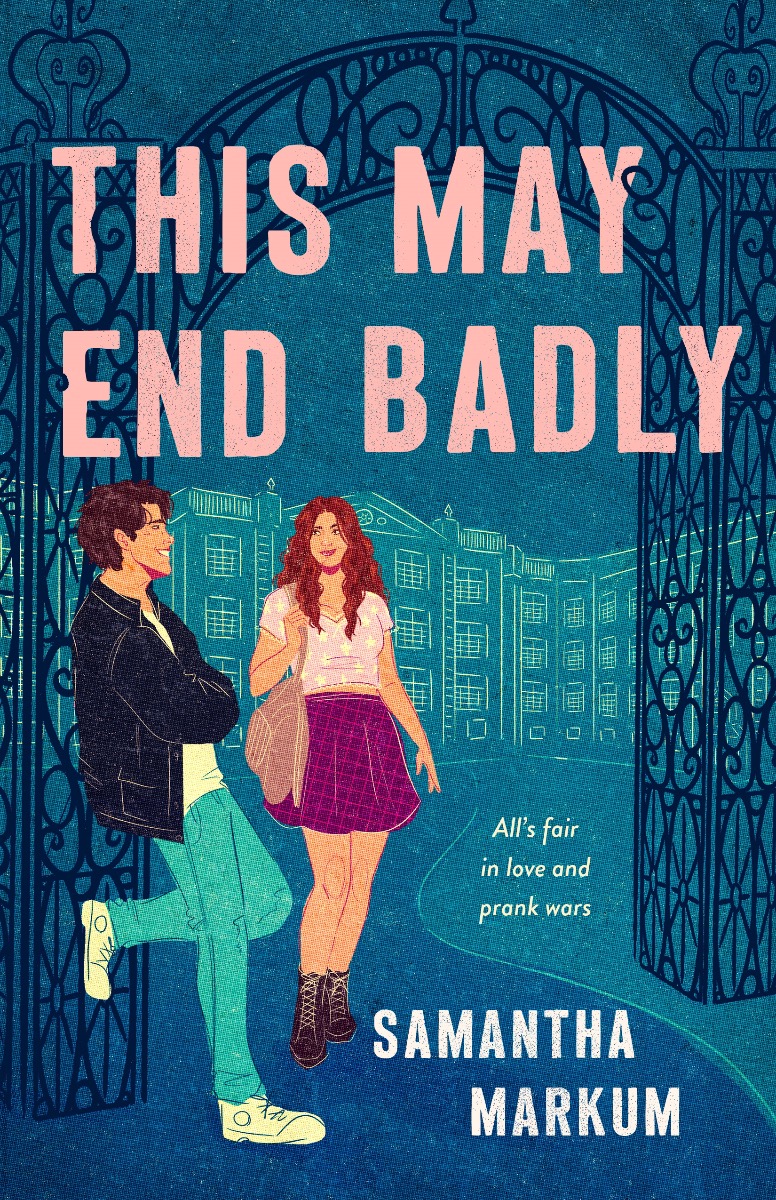 
We only have a few hours before sunrise.

I should be tired, but adrenaline pumps through my veins, forcing my eyes wide open. I work on shoving another stake into the soft, damp ground.

“Hurry up,” Gemma whispers with some urgency. She’s anxious, but then again, she’s always anxious.

“I can see security,” Jade says from my Bluetooth earbud. “They’re rounding the south side.”

“South side?” Sumi’s snort echoes through the earbud. “Doe can barely tell her right from her left. You think she knows north from south?”

“Shut up, Sumi,” I say, banging the last stake into place. “You just worry about yourself.”

“Nothing to worry about,” Sumi says, sounding pleased. “I’ve been done for ten minutes.”

Gemma lets out a panicky hum. “I think I see flashlights!”

“She’s staying home next time,” Shawn says from my side.

“No!” Jade protests. “I can’t focus on anything with her teeth chattering in my ear.”

I glance at Gemma. Sure enough, she’s got two fingernails in her mouth, hammering at them with her front teeth.

“Will you get her out of here?” I say to Shawn.

“I’m almost done. The only thing Gem is about to finish is a nervous breakdown.”

I give Shawn a look.

Gemma gives a meek protest as Shawn grabs her arm and hauls her out the front gate. They duck around the side, and I hear Sumi say from my earbud, “Oh, hey, guys.”

I stay crouched behind the Winfield Academy sign, working the last stake into the ground. Shawn was kind enough to attach the ropes, at least—because I do hear footsteps, and they’re closer than I expected.

“You’ve got company,” Jade says. “Shit—shit. You’ve got real company. Where did this guy come from?”

“You’ll be done for real if you don’t get out of there,” Gemma says from the earbud.

I grit my teeth. “Someone get her off the line.”

I secure the last stake and look up, triumph squelching the nervousness creeping in. But then I spot the beam of a flashlight headed my way. I freeze, crouched in the dark. I could slip out now, but I’d be spotted for sure, and any close investigation would reveal what we’ve done. I can’t let that happen—not before the first car arrives.

Somewhere on the other side of the building, a dog howls. The flashlight swings in the other direction.

I sprint out the front gate, hurtle over the trip wire, and duck around the corner, where I collide with Sumi and Gemma.

Jade laughs in my ear. “She spent all summer perfecting that.”

“Her neighbor got that hound dog,” Gemma says.

“It woke me up every goddamn morning.” Shawn huffs a laugh from my earbud.

We duck away from the light of the streetlamps as we sneak to the building across the road. Shawn meets us as we dart through the entrance.

I will either find a way or make one.

When we meet up in the stairwell in the morning, I feel like I got about two minutes of sleep. Somehow, Gemma looks even worse off. Circles as dark as bruises drag practically halfway down her cheeks, and her pale skin looks almost gray. Even her freckles have dulled.

She laughs, the sound brittle. “I didn’t sleep.”

To be fair, Gemma isn’t a great sleeper on the best of days. During the school year, she spends most nights up studying, hours after the rest of us are asleep—except maybe Sumi, who could be awake at any time of night for any number of reasons, none of them similar to Gemma’s.

Things have gotten especially bad since this summer, when Gemma came out to her parents and two older sisters. From the few details she divulged, things went well. But revealing a secret, even one taken well, has a way of creeping into a person’s anxieties.

Shawn appears at our backs wearing a pair of overalls she cut into shorts, looking like a summer-tanned farm girl with her sandy brown hair tied in a messy topknot. She’s balancing four coffees in a holder in one hand and a fifth in the other. “Take these.”

Gemma grabs one and pops it open to blow on it.

This May End Badly by Samantha Markum is coming to our shelves soon! You may pre-order below and stay tuned on our social media handles for when it's released!