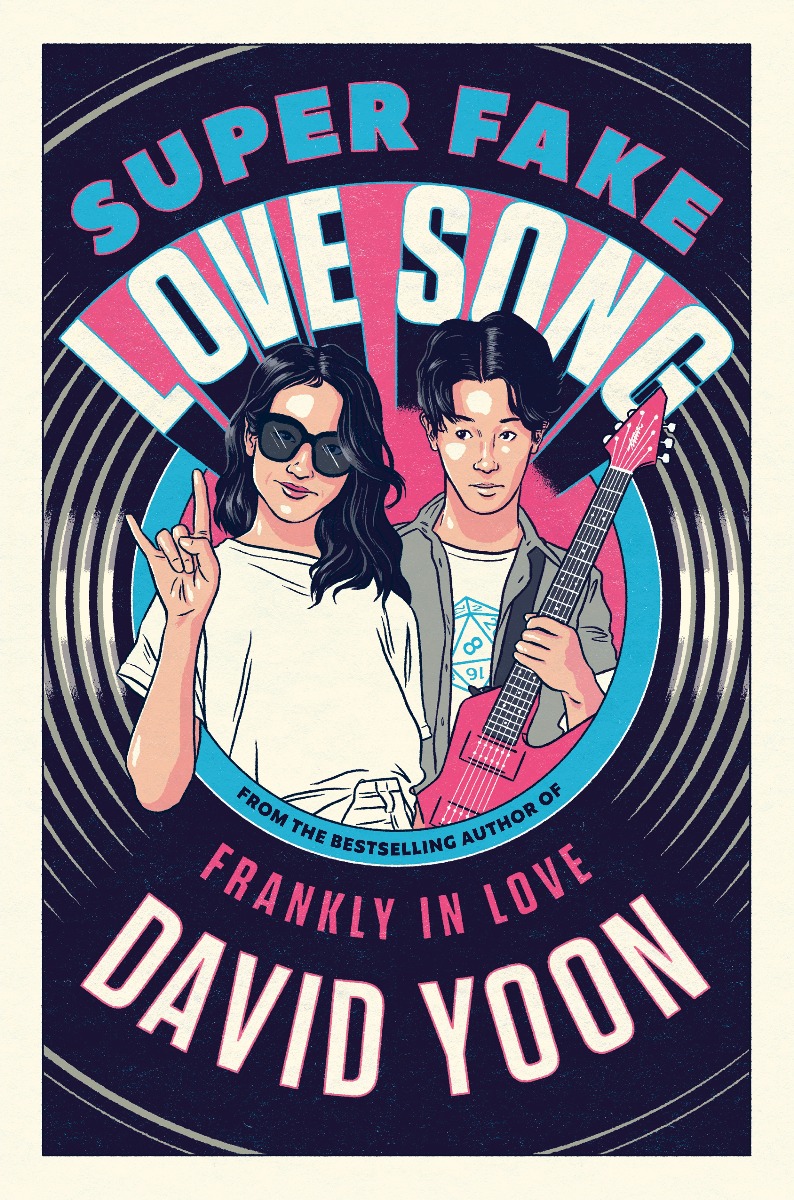 When Sunny Dae–self-proclaimed total nerd–meets Cirrus Soh, he can’t believe how cool and confident she is. So when Cirrus mistakes Sunny’s older brother Gray’s bedroom–with its electric guitars and rock posters–for Sunny’s own, he sort of, kind of, accidentally winds up telling her he’s the front man of a rock band.

Before he knows it, Sunny is knee-deep in the lie: He ropes his best friends into his scheme, begging them to form a fake band with him, and starts wearing Gray’s rock-and-roll castoffs. But no way can he trick this amazing girl into thinking he’s cool, right? Just when Sunny is about to come clean, Cirrus asks to see them play sometime. Gulp.

Now there’s only one thing to do: Fake it till you make it.

My door was blank and unadorned. My door could have led to anything—a linen closet, a brick wall, an alternate universe.

You only get one chance to make a ﬁrst impression, Mom liked to say. It was characteristically shallow advice, but there was a truth to it that I only now realized.

I followed Cirrus, heading left into Gray’s room instead of right into mine.

Cirrus had already made herself at home in Gray’s salvaged steel swivel chair. She drummed her fingers on her thighs, as if eager to be introduced to the room’s history.

I started to say something, then stopped.

I started to say something else, then stopped.

Cirrus eyed me with growing concern.

“These are guitars,” I said suddenly. I craned my neck back to look at them. I stretched, sniffed, did all the things amateurs do when gearing up for a big lie. “They’re my guitars.”

Cirrus brightened. “Wait. Are you in a band?”

Cirrus looked at the guitars again, as if they had changed. “Very cool.”

I heard none of this, because my lie was still busy pinging around the inside of my big empty head like a stray shot. Shocking, how easily the lie had slipped out.

“You’re more than cool,” continued Cirrus. “You’re brave. Most people barely have hobbies, if they bother to try anything at all. Most people let the dream starve and die in the kill-basement of their soul and only visit the rotting corpse when they themselves are finally on death’s door wondering, What was I so afraid of this whole time?”

Cirrus spotted something behind my guitars [Gray’s guitars]: the torn Mortals flyer. “Is that you?”

Then she flashed me a look.

Not just any look.

I recognized the Look from when Gray was still at school. The Look was a particular type of glance Gray got often—a combination of burning curiosity barely masked by bogus nonchalance. Everyone badly wanted to know Gray; everyone pretended they didn’t.

The Look was the expression people gave to someone doing something well, and with passion. It was an instinctive attraction to creativity—the highest form of human endeavor—expressed by emitting little hearts out of our eyes. It was falling a little bit in love with people who were fashioning something new with their hands and their imaginations.

I had always wondered what it would feel like to get the Look, and now I realized I had just found out.

The Look was pure deadly sweet terror, and it felt incredible.

I instantly wanted another.

Excerpted from Super Fake Love Song by David Yoon. Copyright © 2020 by David Yoon. All rights reserved. No part of this excerpt may be reproduced or reprinted without permission in writing from the publisher.

Super Fake Love Song is coming to our shelves soon! Stay tuned on our social media for when it's released. You can read more first few pages here on the blog.

First Few Pages: The Gilded Ones by Namina Forna February 5, 2021