Twelve-year-old Silas is awoken in the dead of night by three menacing horsemen who take his father away. Silas is left shaken, scared, and alone, except for the presence of his companion, Mittenwool... who happens to be a ghost. When a pony shows up at his door, Silas makes the courageous decision to leave his home and embark on a perilous journey to find his father. Along the way, he will face his fears to unlock the secrets of his past and explore the unfathomable mysteries of the world around him.

R. J. Palacio spins a harrowing yet distinctly beautiful coming-of-age story about the power of love and the ties that bind us across distance and time. With the poignant depth of War Horse and the singular voice of True Grit, this is one of those rare books poised to become an instant classic for readers of all ages. 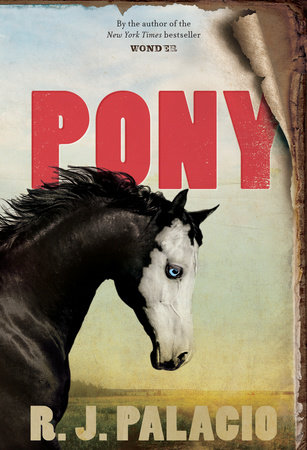 It was my bout with lightning that inspired Pa to become immersed in the photographic sciences, which is how this all began.

Pa had always had a natural curiosity about photography, having come from Scotland, where such arts flourish. He dabbled in daguerreotypes for a short while after settling in Ohio, a region naturally full of salt springs (from which comes the agent bromine, an essential component of the developing process). But daguerreotypes were an expensive enterprise that turned very little profit, and Pa did not have the means to pursue it. People haven’t the money for delicate souvenirs, he reasoned. Which is why he became a boot-maker. People always have a need for boots, he said. Pa’s specialty was the calf-high Wellington in grain leather, to which he added a secret compartment in the heel for the storing of tobacco or a pocketknife. This convenience was greatly desired by customers, so we got by pretty well on those boot orders. Pa worked in the shed next to the barn, and once a month traveled to Boneville with a cartful of boots pulled by Mule, our mule.

But after lightning imprinted my back with the image of the oak tree, Pa once again turned his attention to the science of photography. It was his belief that the image on my skin had come there as a consequence of the same chemical reactions at play in photography. The human body, he told me as I watched him mixing chemicals that smelled of rotten eggs and cider vinegar, is a vessel full of the same mysterious substances, subject to the same physical laws, as everything else in the universe. If an image can be preserved by the action of light upon your body, it can be preserved by the same action upon paper. That is why it was not daguerreotypes that drew his interest anymore, but a new form of photography involving paper soaked in a solution of iron and salt, to which is transferred, by means of sunlight, a positive image from a glass negative.

Pa quickly mastered the new science, and became a highly regarded practitioner of the collodion process, as it was called, an art form hardly seen in these parts. It was a bold field, requiring great experimentation, and resulting in pictures most astounding in their beauty. Pa’s irontypes, as he called them, had none of the exactitude of daguerreotypes, but were imbued with subtle shadings that made them look like charcoal art. He used his own proprietary formula for the sensitizer, which is where the bromine came in, and applied for a patent before opening a studio in Boneville, down the road from the courthouse. In no time at all, his iron-dusted paper portraits became quite the rage around here, for not only were they infinitely cheaper than daguerreotypes, but they could be reproduced over and over again from a single negative. Adding even more to their allure, and for an extra charge, Pa would tint them with a mix of egg wash and colored pigment, which gave them a lifelike semblance most extraordinary to behold. People traveled from all over to have their portraits taken. One fancy lady came all the way from Akron for a sitting. I assisted in Pa’s studio, adjusting the skylight and cleaning the focusing plates. A few times Pa even let me polish the new brass portrait lens, which had been a major investment in the business and required delicacy in its handling. Such had our circumstances turned, Pa’s and mine, that he was contemplating selling his boot-making enterprise altogether, for he said he much preferred the smell of mixing potions to the stink of people’s feet.

It was at this time that our lives were forever changed by the predawn visitation of three riders and a bald-faced pony.

Mittenwool was the one who roused me from my deep slumber that night.

“Silas, awake now. There are riders coming this way,” he said.

I would be lying if I said I was jolted up right away, to my feet, by the urgency of his call. But I did no such thing. I simply mumbled something and turned in my bed. He nudged me hard then, which is not a simple feat for him. Ghosts do not easily maneuver in the material world.

“Let me sleep,” I answered grumpily.

It was then that I heard Argos howling like a banshee downstairs, and Pa cock his rifle. I looked out the tiny window next to my bed, but it was a black-as-ink night and I could see nothing.

“There are three of them,” said Mittenwool, squinting over my shoulder through the same window.

“Pa?” I called out, jumping down from the loft. He was ready, boots on, peering through the front window.

“Stay down, Silas,” he cautioned.

“Should I light the lamp?”

“No. Did you see them from your window? How many are there?” he asked.

“I didn’t see them myself, but Mittenwool says there are three of them.”

Pa didn’t answer. We could hear the galloping coming toward us now. Pa cracked the front door open, rifle at the ready. He threw on his coat and turned to look at me.

“You don’t come out, Silas. No matter what,” he said, his voice stern. “If there’s trouble, you run over to Havelock’s house. Out the back through the fields. You hear me?”

“You’re not going out there, are you?”

I collared Argos. “You’re not going out there, are you?” I asked again, frightened.

He did not stop to answer me but opened the door and ventured out to the porch, aiming his rifle toward the approaching riders. He was a brave man, my pa.

Pony by R. J. Palacio is coming to our shelves soon! Stay tuned on our social media handles for when it's released.