First Few Pages: My Time Will Come by Ian Manuel

The United States is the only country in the world that sentences thirteen- and fourteen-year-old offenders, mostly youth of color, to life in prison without parole. In 1991, Ian Manuel, then fourteen, was sentenced to life without parole for a non-homicide crime. In a botched mugging attempt with some older boys, he shot a young white mother of two in the face. But as Bryan Stevenson, attorney and executive director of the Equal Justice Initiative, has insisted, none of us should be judged by only the worst thing we have ever done.

Capturing the fullness of his humanity, here is Manuel’s powerful testimony of growing up homeless in a neighborhood riddled with poverty, gang violence, and drug abuse—and of his efforts to rise above his circumstances, only to find himself, partly through his own actions, imprisoned for two-thirds of his life, eighteen years of which were spent in solitary confinement. Here is the story of how he endured the savagery of the United States prison system, and how his victim, an extraordinary woman, forgave him and bravely advocated for his freedom, which was achieved by an  Equal Justice Initiative push to address the barbarism of our judicial system and bring about “just mercy.”

Full of unexpected twists and turns as it describes a struggle for redemption, My Time Will Come is a paean to the capacity of the human will to transcend adversity through determination and art—in Ian Manuel’s case, through his dedication to writing poetry. 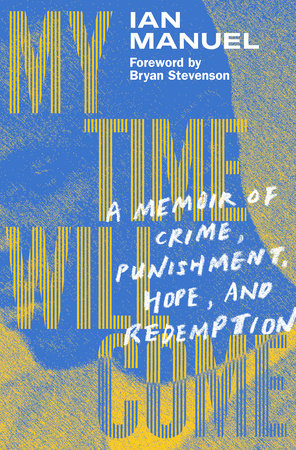 My story has been told many times. you can read it in police files and court records, case notes and daily logs. The story of my birth, for example, told by a judge sentencing my mother to prison soon after my arrival in this world. And there’s the story of that day when I was five, in the case notes of a social worker who drove me to a foster home and then, a few days later, drove me back to the projects, to the room I had shared with my abuser. The story of my childhood was told multiple times by juvenile probation officers who found me to be a problem best managed inside the walls of institutions. In the illustrious space—cold and intensely bright in my memory—of an adult courtroom, it would be the robed and sober voice of a judge who would foretell my death when I was thirteen. Relying on the stories of police officers, lawyers, and other accomplished professionals, he would send me to Florida State Prison, never to be released. As I said, my story has been told many times and by highly regarded experts in their fields. But today, if you’ll bear with me, I would like to try to tell it to you myself. I have reason to believe the experts may be wrong about me. You see, today, thirty years later, I am neither in prison nor dead.

In the stories told of my life, each begins with a crime. A crime by my mother against a neighbor, crimes against me, crimes committed by me. My stories are defined by legal codes and diagnostic categories. To tell you the truth, I struggle to shake these, to describe myself to you as I am, in all that I am. My sense, though, is that this is an experience true to millions of people who, like me, happened to be born into poor neighborhoods at a time in history when the intervention of choice is arrest and incarceration—even for mothers of infants, even for young children. I would like not to begin my story as the experts have done, with the story of a crime. But that is, in fact, the reality of this life. So I will begin with the story of the worst thing I have ever done, the crime I was sentenced to die in prison for. But I begin here not because, as the experts have said, this defines me. I begin here because I hurt someone very badly during a time in my life when I was blinded by my own hurt. And I want to admit to it. I want to state the truth of it. I think I owe it to her. And to the child that I was. I think we need to speak about harm, what we’ve done, what’s been done to us, because that is what will open doors, what will air out and begin to heal the wounds we carry and have caused. And that is what will allow for new stories to begin to be told. I am telling you my story today because I want to tell a story of hope and meaning, of being one among a human family.

I shot Debbie Baigrie on July 27, 1990. I was thirteen and, along with a group of older boys, I was trying to rob her and the man who was walking her to her car. He, of course, was walking her to her car out of concern for her being a woman, alone at night, in a parking lot. My friends and I were the embodiment of his reasons for concern and I believe that night I only confirmed any beliefs he had about kids like me.

At the time, my mom and I were homeless, staying with a family friend in the housing projects I had called home most of my life. Central Park Village had been a prosperous, entrepreneurial black community before I was born. But after deadly riots and looting there in 1967, the neighborhood had fallen on hard times. It was now a complex of run-down, low-rise buildings, riddled with poverty, gang violence, drugs, and crime. Because Mom had let the rent on our place fall behind, she and I were staying with a lady known to me as Aunt Louise, though she was no relation of ours. During my childhood, Central Park Village was a place of comings and goings, among family, friends, and acquain­tances; the place was full of people like us—roamers.
Excerpted from My Time Will Come by Ian Manuel. Copyright © 2021 by Ian Manuel. All rights reserved. No part of this excerpt may be reproduced or reprinted without permission in writing from the publisher.
Ian Manuel's memoir, My Time Will Come, is coming to our shelves soon! You may pre-order below and stay tuned on our social media handles for when it's released!
June 1, 2021 |  Categories: First Few Pages |  Tags: first few pages, excerpt, memoir, biography

Once Upon Another Time: 6 Retellings You Should Add to Your To-Be-Read List November 19, 2021

Loved It Ends WIth Us? Here's a Guide to Other CoHo Books You Should Read. November 17, 2021