Many of Haruki Murakami’s fans know about his massive vinyl record collection (10,000 albums!) and his obsession with running, but few have heard about a more intimate passion: his T-shirt collecting.

In Murakami T, the famously reclusive novelist shows us his T-shirts—from concert shirts to never-worn whiskey-themed Ts, and from beloved bookstore swag to the shirt that inspired the iconic short story “Tony Takitani.” These photographs are paired with short, frank essays that include Murakami’s musings on the joy of drinking Guinness in local pubs across Ireland, the pleasure of eating a burger upon arrival in the United States, and Hawaiian surf culture in the 1980s.

Together, these photographs and reflections reveal much about Murakami’s multifaceted and wonderfully eccentric persona. 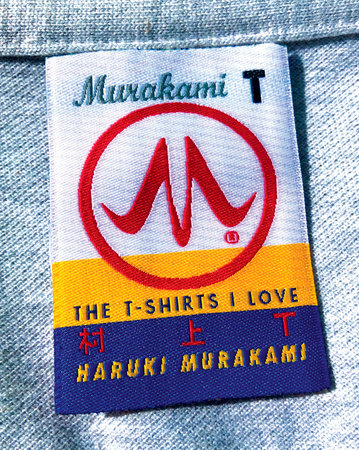 I’m not particularly interested in collecting things, but there’s one sort of running motif in my life: despite my basic indifference, objects just seem to collect around me, of their own volition. Stacks and stacks of LP records—so many I’ll never listen to them all; books I’ve already read and will probably never open again; a ragtag assemblage of magazine clippings; dinky little pencils so worn down they don’t fit into a pencil sharpener anymore—all kinds of things just keep on piling up. Like the character Urashima Taro in the Japanese fairy tale, who can’t help himself from rescuing a little turtle on the beach, I find myself somehow resigned to it. Carried away by some emotion I can’t even name, I wind up gathering things around me. Though I’m well aware that collecting hundreds of stubs of pencils doesn’t serve any possible purpose.

T-shirts are one of those objects that just naturally pile up. They’re cheap, so whenever an interesting one catches my eye, I invariably buy it—plus people give me various novelty T-shirts from around the world, I get commemorative T-shirts whenever I finish a marathon, and I pick up a few at my destination when I travel, instead of bringing along extra clothes... Which is how, before I even realized it, the number of T-shirts in my life has skyrocketed, to the point where there’s no room in my drawers for all of them anymore and I’ve had to store the overflow in stacked-up cardboard boxes. It’s not at all like one day I simply made up my mind that Okay, I’m going to start a T-shirt collection. Believe me, that’s not the case.

I doubt this book will be that useful to anyone (much less being of any help in solving any of the myriad problems we face at present), yet, that said, it could turn out to be meaningful, as a kind of reference on customs that later generations could read to get a picture of the simple clothes and fairly comfortable life one novelist enjoyed from the end of the twentieth century into the beginning of the twenty-first. But then again—maybe not. Either way works for me. I’m just hoping you can find some measure of enjoyment in this little collection.

Murakami T by Haruki Murakami is coming to our shelves soon! You may pre-order below and stay tuned on our social media handles for when it's released!