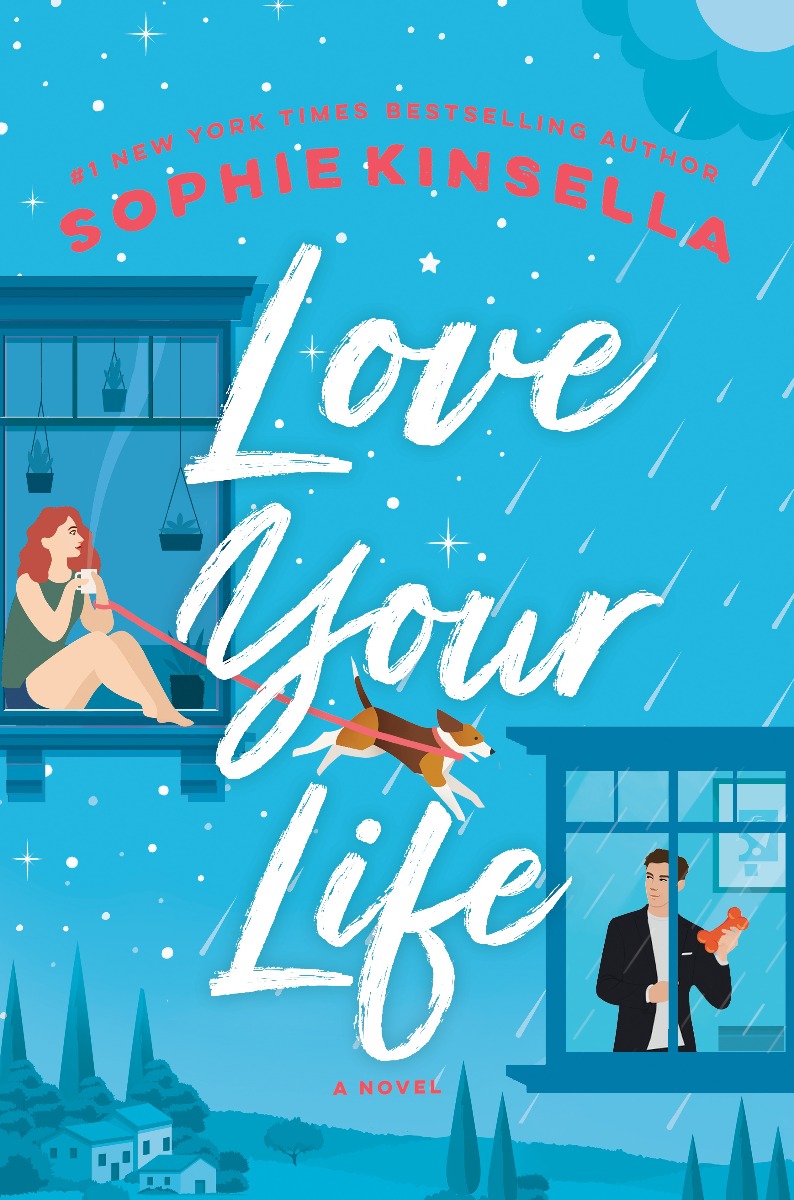 Call Ava romantic, but she thinks love should be found in the real world, not on apps that filter men by height, job, or astrological sign. She believes in feelings, not algorithms. So after a recent breakup and dating app debacle, she decides to put love on hold and escapes to a remote writers’ retreat in coastal Italy. She’s determined to finish writing the novel she’s been fantasizing about, even though it means leaving her close-knit group of friends and her precious dog, Harold, behind.

At the retreat, she’s not allowed to use her real name or reveal any personal information. When the neighboring martial arts retreat is canceled and a few of its attendees join their small writing community, Ava, now going by “Aria,” meets “Dutch,” a man who seems too good to be true. The two embark on a baggage-free, whirlwind love affair, cliff-jumping into gem-colored Mediterranean waters and exploring the splendor of the Italian coast. Things seem to be perfect for Aria and Dutch.

But then their real identities—Ava and Matt—must return to London. As their fantasy starts to fade, they discover just how different their personal worlds are. From food choices to annoying habits to sauna etiquette . . . are they compatible in anything? And then there’s the prickly situation with Matt’s ex-girlfriend, who isn’t too eager to let him go. As one mishap follows another, it seems while they love each other, they just can’t love each other’s lives. Can they reconcile their differences to find one life together?

As I reach for the doorbell, my phone bleeps with a text and my head instantly fills with a roll call of possibilities.

• Someone I know is dead.

• Someone I know won the lottery.

• I’m late for an appointment I’d forgotten about. Shit.

• I was witness to a crime and now I need to give very specific, detailed evidence about something I can’t remember. Shit.

• My doctor was looking back through her notes. (Why? Unclear.) And she found something. “I don’t want to worry you, but . . .”

• Someone sent me flowers and my neighbor took them in.

• A celebrity just tweeted something I need to see. Ooh. What?

But as I take out my phone, I see that it’s from Seth, the guy I had a date with last week. The one who said nothing, the whole evening. Nothing.

Most guys have the opposite problem. They drone on about themselves and their brilliant achievements and as you’re paying your half they ask as an afterthought, “What do you do again?” But Seth stared at me silently through his close-set eyes while I babbled nervously about the butternut squash soup.

What does he have to say? Does he want another date? Yikes. My stomach cringes at the very thought, which is a sign. One of my major rules of life is: You should listen to your body. Your body is wise. Your body knows.

Hello, Ava. After consideration I have decided our relationship is not something I can continue with.

I eye-roll very deliberately toward the phone. Although I know he can’t see me, I have this very slight theory that you can somehow convey emotions through your phone.

(I haven’t shared this theory with anyone, because most people are quite narrow-minded, I find, even my best friends.)

You may have thought I was contacting you to ask for another date, in which case I’m sorry to have raised your hopes.

My hopes? My hopes? He should be so lucky.

You’ll want to know why.

I mean, I can guess.

Why should I have to guess, anyway? Who wants to guess why someone doesn’t want to date them? It sounds like some awful TV game show called Is It My Bad Breath?

I’m afraid I cannot date anyone who thinks butternut squash soup has a soul.

I stare at the phone, incensed. He has totally misrepresented me. I did not say butternut squash soup has a soul. I simply said I thought we should be open-minded about the way the physical and spiritual interlink. Which I do. We should.

As if he can read my mind, Harold gives a sympathetic whine and rubs his nose against my leg. You see? If that doesn’t prove the world is interconnected, then what does?

I want to text back, Sorry not to be closed-minded enough for your limited outlook on life. But that would indicate that I’ve read his texts, which I haven’t.

Well, OK, I have, but the point is, I’m deleting them from my mind. All gone. Seth who? Date? What?

I ring the doorbell, then let myself in with the key Nell’s given me. It’s what we all do, in case Nell’s having an episode. It’s been awhile, but they can flare up viciously out of nowhere.

“Hi!” She appears in the hall, grinning widely, her hair pink and spiky.

Nell’s hair color has changed about 106 times over the years that I’ve known her, whereas mine hasn’t changed once. It’s still the same dark auburn, straight down to my shoulders, easy to swish into a ponytail.

Not that hair is really on my mind right now. I was distracted momentarily by Seth’s texts—but now that I’m inside the house, my throat is starting to tighten. My stomach feels heavy. I glance down at Harold and he turns his head inquiringly toward me in that adorable way he has, whereupon my eyes start to prickle. Oh God. Can I really do this?

Nell squats down and holds out her hands to Harold. “Ready for your holiday?”

Harold surveys her for a moment, then turns back to me, his liquid brown gaze fixing mine piteously.

If anyone thinks dogs can’t understand everything we say and do, then they’re wrong, because Harold knows. He’s trying to be brave, but he’s finding this as hard as I am.

His face is crunched into a heartbreaking “why are you doing this to me?” expression. His tail is gently thumping on the ground in an encouraging, hopeful way, as though I might suddenly change my mind, cancel my flight, and take him out to play.

“Harold can’t wait to stay with me,” says Nell firmly, ushering us both into the living room. “Can you, Harold?”

In answer, Harold screws up his face still more and gives a soul-shattering whine.

“That dog should go on the stage,” says Sarika, glancing up at him from her laptop with an amused look. Sarika isn’t really a dog person—she admits as much—but she’s a Harold person. You can’t meet Harold and not be a Harold person.

I found Harold at a rescue center four years ago when he was just a puppy, and it was instant, utter devotion. He looked up at me, his eyes bright, his breath all snuffly and excited, and he seemed to be saying, “There you are! I knew you’d come!”

I’m not saying it was plain sailing. I’d never had a dog before. I’d longed for one as a child, but my parents were the type who keep vaguely promising, then it never happens. So I was a beginner at looking after a dog. And Harold was a beginner at being looked after. Because, believe me, he was not looked after by the people who abandoned him on the side of the A414. That was not looking after him. Just thinking about it makes me feel hot and bothered.

Anyway, so it’s been a learning curve. When Harold first arrived at my flat, he had a freak-out. He was quite clearly saying, “What have I done, agreeing to live with you?” And I had similar wobbles. There was quite a lot of howling, on both sides. But now I can’t imagine life without him. Yet here I am, planning to leave him for a week.

“Ava, stop stressing. You realize he’s trying to make you feel bad?” says Nell. She turns to Harold and surveys him sternly. “Listen, mate, I don’t fall for your hammy act. Ava can go on holiday without you. It’s allowed. So stop giving her a hard time.”

For a long moment Harold and Nell lock eyes—two huge personalities confronting each other—then at last Harold subsides. He gives me another reproachful look but pads over to the hearth rug by Nell’s chair and settles down.

“Do not apologize to him,” says Nell to me. “And do not waste all week mooning over videos of Harold instead of writing your book.”

I don’t have many life tips. But one of them is: If you’re ever feeling sorry for yourself, visit Nell. She’s tough in all the right places. She bounces back stupid thoughts at you. Her matter-of-fact attitude whips through you like a gust of sharp, cold air.

“Here’s all his stuff.” I dump my massive bag on the floor. “Bed, water bowl, blanket, food . . . Oh, his essential oils!” I suddenly remember, taking the bottle from my bag. “I’ve made him a new blend, lavender and cedarwood. You just have to spritz his—”

“Bedding.” Nell cuts me off. “Ava, relax. You’ve already sent me five emails about this, remember?” She takes the bottle from me and scrutinizes it briefly before putting it down. “That reminds me, I’ve been meaning to ask. Whatever happened to your aromatherapy qualification?”

My mind flicks back to my aromatherapy books and bottles, shoved to the side in my kitchen. I’m doing an online course, and I must get back to it, because I’m definitely still interested in becoming a part-time aromatherapist.

Love Your Life will be on our shelves soon! Get it as soon as it hits our shelves by pre-ordering below. Read more first few pageshere on the blog.
October 21, 2020 |  Categories: First Few Pages |  Tags: fiction, first few pages, excerpt, contemporary fiction, romance

Mother Knows Best: Recommended Reads from Moms, for Moms May 9, 2021