Here is Ellison, the master of American vernacular—the preacher’s hyperbole and the politician’s rhetoric, the rhythms of jazz and gospel and ordinary speech—at the height of his powers, telling a powerful, evocative tale of a prodigal of the twentieth century.

“Tell me what happened while there’s still time,” demands the dying senator Adam Sunraider to the Reverend A. Z. Hickman, the itinerant Negro preacher whom he calls Daddy Hickman. As a young man, Sunraider was Bliss, an orphan taken in by Hickman and raised to be a preacher like himself. His history encompasses camp meetings where he became the risen Lazarus to inspire the faithful; the more ordinary joys of Southern boyhood; bucolic days as a filmmaker; lovemaking with a young woman in a field in the Oklahoma sun. And behind it all lies a mystery: how did this chosen child become the man who would deny everything to achieve his goals? 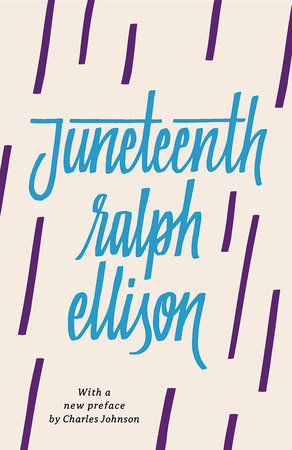 Two days before the shooting a chartered planeload of Southern Negroes swooped down upon the District of Columbia and attempted to see the Senator. They were all quite elderly: old ladies dressed in little white caps and white uniforms made of surplus nylon parachute material, and men dressed in neat but old-fashioned black suits, wearing wide-brimmed, deep-crowned panama hats which, in the Senator's walnut-paneled reception room now, they held with a grave ceremonial air. Solemn, uncommunicative and quietly insistent, they were led by a huge, distinguished-looking old fellow who on the day of the chaotic event was to prove himself, his age notwithstanding, an extraordinarily powerful man. Tall and broad and of an easy dignity, this was the Reverend A. Z. Hickman--better known, as one of the old ladies proudly informed the Senator's secretary, as "God's Trombone."

This, however, was about all they were willing to explain. Forty-four in number, the women with their fans and satchels and picnic baskets, and the men carrying new blue airline take-on bags, they listened intently while Reverend Hickman did their talking.
"Ma'am," Hickman said, his voice deep and resonant as he nodded toward the door of the Senator's private office, "you just tell the Senator that Hickman has arrived. When he hears who's out here he'll know that it's important and want to see us."

"But I've told you that the Senator isn't available," the secretary said. "Just what is your business? Who are you, anyway? Are you his constituents?"

"Constituents?" Suddenly the old man smiled. "No, miss," he said, "the Senator doesn't even have anybody like us in his state. We're from down where we're among the counted but not among the heard."

"Then why are you coming here?" she said. "What is your business?"

The secretary, a young Mississippian, sighed. Obviously these were Southern Negroes of a type she had known all her life--and old ones; yet instead of being already in herdlike movement toward the door they were calmly waiting, as though she hadn't said a word. And now she had a suspicion that, for all their staring eyes, she actually didn't exist for them. They just stood there, now looking oddly like a delegation of Asians who had lost their interpreter along the way, and were trying to tell her something which she had no interest in hearing, through this old man who himself did not know the language. Suddenly they no longer seemed familiar, and a feeling of dreamlike incongruity came over her. They were so many that she could no longer see the large abstract paintings hung along the paneled wall, nor the framed facsimiles of State Documents which hung above a bust of Vice-President Calhoun. Some of the old women were calmly plying their palm-leaf fans, as though in serene defiance of the droning air conditioner. Yet she could see no trace of impertinence in their eyes, nor any of the anger which the Senator usually aroused in members of their group. Instead, they seemed resigned, like people embarked upon a difficult journey who were already far beyond the point of no return. Her uneasiness grew; then she blotted out the others by focusing her eyes narrowly upon their leader. And when she spoke again her voice took on a nervous edge.

"I've told you that the Senator isn't here," she said, "and you must realize that he is a busy man who can only see people by appointment. . . ."

"You don't just walk in here and expect to see him on a minute's notice."

"We understand that, ma'am," Hickman said, looking mildly into her eyes, his close-cut white head tilted to one side, "but this is something that developed of a sudden. Couldn't you reach him by long distance? We'd pay the charges. And I don't even have to talk, miss; you can do the talking. All you have to say is that we have arrived."

"I'm afraid this is impossible," she said.

The very evenness of the old man's voice made her feel uncomfortably young, and now, deciding that she had exhausted all the tried-and-true techniques her region had worked out (short of violence) for getting quickly rid of Negroes, the secretary lost her patience and telephoned for a guard.
They left as quietly as they had appeared, the old minister waiting behind until the last had stepped into the hall, then he turned, and she saw his full height, framed by the doorway, as the others arranged themselves beyond him in the hall.

"You're really making a mistake, miss," he said. "The Senator knows us and--"

"Knows you," she said indignantly. "I've heard Senator Sunraider state that the only colored he knows is the boy who shines shoes at his golf club."

We're sorry to have caused you this trouble. It's just that it's very important that the Senator know we're on the scene. So I hope you won't forget to tell him that we have arrived, because soon it might be too late."

There was no threat in it; indeed, his voice echoed the odd sadness which she thought she detected in the faces of the others just before the door blotted them from view.

In the hall they exchanged no words, moving silently behind the guard who accompanied them down to the lobby. They were about to move into the street when the security-minded chief guard observed their number, stepped up, and ordered them searched.

Excerpted from Juneteenth (Revised) by Ralph Ellison. Copyright © 2000 by Ralph Ellison. All rights reserved. No part of this excerpt may be reproduced or reprinted without permission in writing from the publisher.

Juneteenth (Revised) by Ralph Ellison is coming to our shelves soon! You may pre-order below and stay tuned on our social media handles for when it's released!