First Few Pages: How Beautiful We Were

We should have known the end was near. So begins Imbolo Mbue’s powerful second novel, How Beautiful We Were. Set in the fictional African village of Kosawa, it tells of a people living in fear amid environmental degradation wrought by an American oil company. Pipeline spills have rendered farmlands infertile. Children are dying from drinking toxic water. Promises of cleanup and financial reparations to the villagers are made—and ignored. The country’s government, led by a brazen dictator, exists to serve its own interests. Left with few choices, the people of Kosawa decide to fight back. Their struggle will last for decades and come at a steep price. 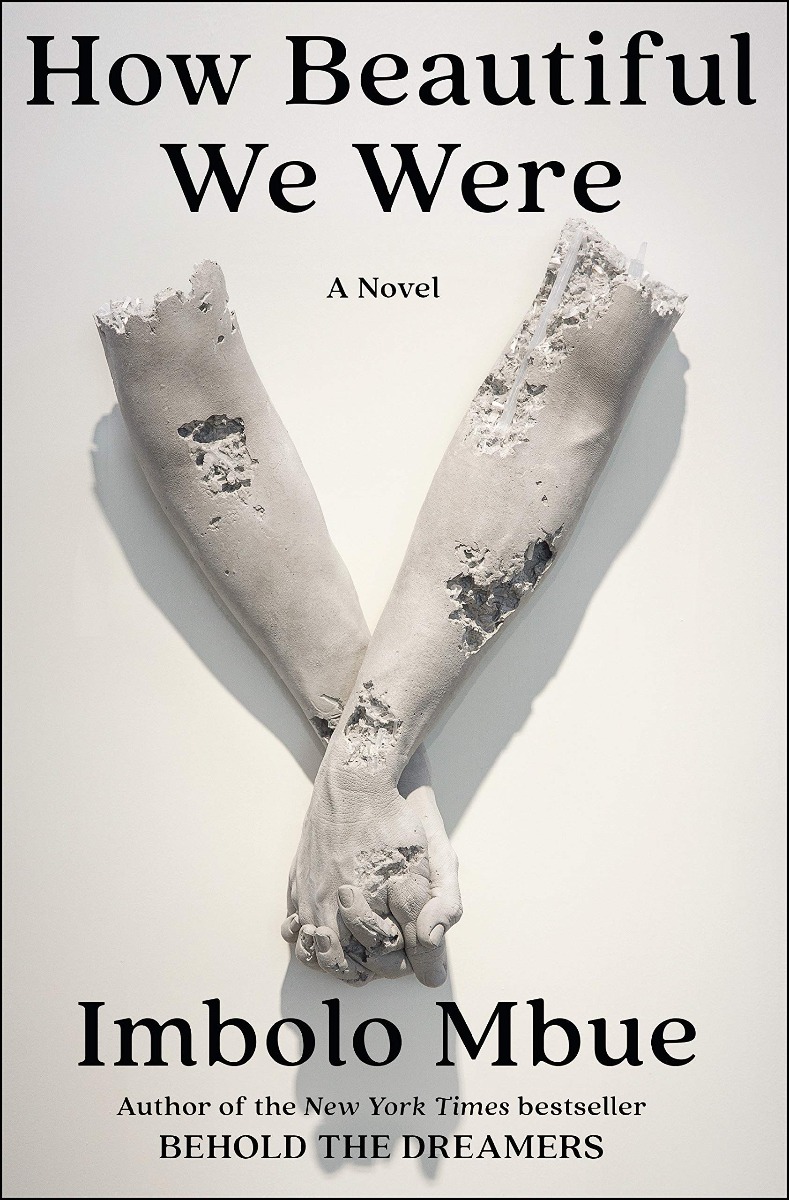 We should have known the end was near. How could we not have known? When the sky began to pour acid and rivers began to turn green, we should have known our land would soon be dead. Then again, how could we have known when they didn’t want us to know? When we began to wobble and stagger, tumbling and snapping like feeble little branches, they told us it would soon be over, that we would all be well in no time. They asked us to come to village meetings, to talk about it. They told us we had to trust them.

We should have spat in their faces, heaped upon them names most befitting—liars, savages, unscrupulous, evil. We should have cursed their mothers and their grandmothers, flung pejoratives upon their fathers, prayed for unspeakable calamities to befall their children. We hated them and we hated their meetings, but we attended all of them. Every eight weeks we went to the village square to listen to them. We were dying. We were helpless. We were afraid. Those meetings were our only chance at salvation.

We ran home from school on the appointed days, eager to complete our chores so we would miss not one word at the assembly. We fetched water from the well; chased goats and chickens around our compounds into bamboo barns; swept away leaves and twigs scattered across our front yards. We washed iron pots and piles of bowls after dinner; left our huts many minutes before the time the meeting was called for—we wanted to get there before they strode into the square in their fine suits and polished shoes. Our mothers hurried to the square too, as did our fathers. They left their work unfinished in the forest beyond the big river, their palms and bare feet dusted with poisoned earth. The work will be there waiting for us tomorrow, our fathers said to us, but we’ll only have so many opportunities to hear what the men from Pexton have to say. Even when their bodies bore little strength, after hours of toiling beneath a sun both benevolent and cruel, they went to the meetings, because we all had to be at the meetings.

The only person who did not attend the meetings was Konga, our village madman. Konga, who had no awareness of our suffering and lived without fears of what was and what was to come. He slept in the school compound as we hurried along, snoring and slobbering if he wasn’t tossing, itching, muttering, eyes closed. Trapped as he was, alone in a world in which spirits ruled and men were powerless under their dominion, he knew nothing about Pexton.

In the square we sat in near silence as the sun left us for the day, oblivious to how the beauty of its descent heightened our anguish. We watched as the Pexton men placed their briefcases on the table our village head, Woja Beki, had set for them. There were always three of them—we called them the Round One (his face was as round as a ball we would have had fun kicking), the Sick One (his suits were oversized, giving him the look of a man dying of a flesh-stealing disease), and the Leader (he did the talking, the other two did the nodding). We mumbled among ourselves as they opened their briefcases and passed sheets of paper among themselves, covering their mouths as they whispered into each other’s ears to ensure they had their lies straight. We had nowhere more important to be so we waited, desperate for good news. We whispered at intervals, wondering what they were thinking whenever they paused to look at us: at our grandfathers and fathers on stools up front, those with dead or dying children in the first row; our grandmothers and mothers behind them, nursing babies into quietude and shooting us glares if we made a wrong sound from under the mango tree. Our young women repeatedly sighed and shook their heads. Our young men, clustered at the back, stood clench-jawed and seething.

We inhaled, waited, exhaled. We remembered those who had died from diseases with neither names nor cures—our siblings and cousins and friends who had perished from the poison in the water and the poison in the air and the poisoned food growing from the land that lost its purity the day Pexton came drilling. We hoped the men would look into our eyes and feel something for us. We were children, like their children, and we wanted them to recognize that. If they did, it wasn’t apparent in their countenance. They’d come for Pexton, to keep its conscience clean; they hadn’t come for us.

Woja Beki walked up to the front and thanked everyone for coming.

“My dear people,” he said, exposing the teeth no one wanted to see, “if we don’t ask for what we want, we’ll never get it. If we don’t expunge what’s in our bellies, are we not going to suffer from constipation and die?”

We did not respond; we cared nothing for what he had to say. We knew he was one of them. We’d known for years that though he was our leader, descended from the same ancestors as us, we no longer meant anything to him. Pexton had bought his cooperation and he had, in turn, sold our future to them. We’d seen with our own eyes, heard with our own ears, how Pexton was fattening his wives and giving his sons jobs in the capital and handing him envelopes of cash. Our fathers and grandfathers had confronted him, after the evidence had become impossible to dismiss, but he had beseeched them to trust him, telling them he had a plan: everything he was doing was to help us reclaim our land. He had shed two cups of tears and swore by the Spirit that he hated Pexton as much as we did, wasn’t it obvious? Our young men had conspired to kill him, but our old men found out about the plan and pleaded with them to spare him. We’ve already had too many deaths, our old men said; we’ve used up too many burial plots.

Woja Beki continued looking at us, dreadful gums still exposed. We wished we didn’t have to look at them, but there could be no avoidance. They were the first thing we saw whenever we looked at his face: gums as black as the night’s most evil hour, streaked with pink of various shades; tilting brown teeth, wide spaces between.

“My very dear people,” he went on, “even a sheep knows how to tell its master what it wants. That’s why we’ve gathered here again, to resume this discourse. We thank the kind representatives from Pexton for coming back to talk to us. Messengers are good, but why should we use them if we can talk to each other with our own mouths? There’s been a lot of misunderstanding, but I hope this meeting will bring us closer to a resolution of our mutual suffering. I hope that after this evening we and Pexton can continue moving in the direction of becoming good friends. Friendship is a great thing, isn’t it?”

We knew we would never call them friends, but some of us nodded.

In the glow of the fading sun our village looked almost beautiful, our faces almost free of anguish. Our grandfathers and grandmothers appeared serene, but we knew they weren’t—they’d seen much, and yet they’d never seen anything like this.

“We’ll now hear from Mr. Honorable Representative of Pexton, all the way from Bézam to speak to us again,” Woja Beki said, before returning to his seat.

The Leader rose up, walked toward us, and stood in the center of the square.

For several seconds, he stared at us, his head angled, his smile so strenuously earnest we wondered if he was admiring a radiance we’d never been told we had. We waited for him to say something that would make us burst into song and dance. We wanted him to tell us that Pexton had decided to leave and take the diseases with them.

His smile broadened, narrowed, landed on our faces, scanning our stillness. Seemingly satisfied, he began speaking. He was happy to be back in Kosawa on this fine day, he said. What a lovely evening it was, with the half-moon in the distance, such a perfect breeze, was that the sound of sparrows singing in one accord? What a gorgeous village. He wanted to thank us for coming. It was great to see everyone again. Incredible how many precious children Kosawa has. We had to believe him that the people at headquarters were sad about what was happening to us. They were all working hard to resolve this issue so everyone could be healthy and happy again. He spoke slowly, his smile constant, as if he was about to deliver the good news we so yearned for.

The Round One and the Sick One nodded.

“Pexton and the government are your friends,” the Leader said. “Even on your worst day, remember that we’re thinking about you in Bézam and working hard for you.”

Excerpted from How Beautiful We Were by Imbolo Mbue. Copyright © 2020 by Imbolo Mbue. All rights reserved. No part of this excerpt may be reproduced or reprinted without permission in writing from the publisher.

How Beautiful We Were will be on our shelves soon. You can pre-order below. And watch out for when it's released on our social media channels.