First Few Pages: Hour of the Witch by Chris Bohjalian

Boston, 1662. Mary Deerfield is twenty-four-years-old. Her skin is porcelain, her eyes delft blue, and in England she might have had many suitors. But here in the New World, amid this community of saints, Mary is the second wife of Thomas Deerfield, a man as cruel as he is powerful. When Thomas, prone to drunken rage, drives a three-tined fork into the back of Mary’s hand, she resolves that she must divorce him to save her life.

But in a world where every neighbor is watching for signs of the devil, a woman like Mary–a woman who harbors secret desires and finds it difficult to tolerate the brazen hypocrisy of so many men in the colony–soon becomes herself the object of suspicion and rumor. When tainted objects are discovered buried in Mary’s garden, when a boy she has treated with herbs and simples dies, and when their servant girl runs screaming in fright from her home, Mary must fight to not only escape her marriage, but also the gallows.

A twisting, tightly plotted novel of historical suspense from one of our greatest storytellers, Hour of the Witch is a timely and terrifying story of socially sanctioned brutality and the original American witch hunt. 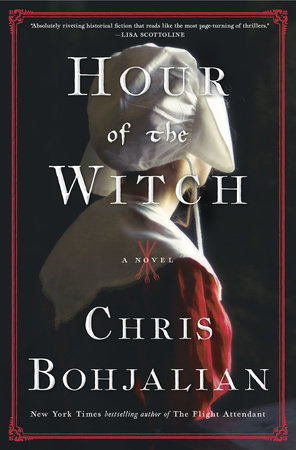 There were two mistakes young men would make when they would first pick up a scythe: they would try to do all the work with their arms, and they would make their swathes far too wide. They would attack the grass, as if they thought it would get up and run away if they didn’t kill it quickly. It would be their fathers or their uncles who would demonstrate how much better off they would be if they would put their backs into the motion too, swinging the snath in an almost indecent, leisurely, metronomical sway. Draw the blade back, hands on the nibs, as the right leg strides ahead; then cut--imagine that sickle moon is the tip of a pendulum on a tall clock--as the left leg walks forward. That was the way.

If the blade were sufficiently sharp, great tufts of grass would collapse around the metal as it advanced through the field, and their arms would not feel like anvils.

The first time that Mary Deerfield’s husband hit her, she didn’t relate the motion to scything: she was in too much pain and she was too surprised. Her skin stung. It was the second time, half a year later, just before she turned twenty and just after the first anniversary of the day they were married, that she noted that he punched her the way a knowledgeable man would scythe. His arm swung effortlessly, the movement graceful and efficient. An arc. She fell against the pumpkin pine table, the pewter candlesticks toppled over, and the tankard of hard cider he had been drinking spilled onto the floor and into the trencher with their dinner. Still, however, she saw most clearly the image of the men scything--the details from her memory more concrete in her mind than even the way the cider was puddling that moment in the stewed pumpkin--and the wavelike rocking of their upper bodies and arms.

He called her a whore and she said he knew that she wasn’t. He said he had seen her looking at other men, younger men, with lust in her gaze. She said this wasn’t true, but she thought he was going to hit her again. And so she prepared herself for the blow, her shoulders scrunched against her neck and her hands before her face. But he didn’t hit her. He was shaking with anger, unfounded though it was, and she hoped a good measure of guilt, but he didn’t strike her again.

Instead he stomped out the door, saddled Sugar, a handsome eight-year-old gray gelding with a black mane, and he was gone. She placed her fingers on her cheek and wondered at its warmth. Blood gathering under the skin? There would be swelling, it was inevitable, and she was glad that they had been alone. She was dizzy with shame. She took his mug and held the cold pewter against the skin where he had hit her, and sat down in her chair. She contemplated a mystery: How is it I am humiliated when I am alone? Does not humiliation demand an audience?

Four years later, Mary Deerfield’s husband snored beside her in bed. In public, he was never a loud or offensive drunk, which was probably why he had never been fined or sent to the stocks. He kept his anger inside his home, and rarely (perhaps never) did he allow it to vent when their young servant girl, Catherine, was present or when his grown daughter would visit. Mary thought she heard the girl moving downstairs now, somewhere near the fireplace, but she couldn’t be sure. It might have been the wind.

The poor girl’s brother was dying. The boy was Catherine’s twin, and he had always been more frail than his sister. The two of them were eighteen. He probably wasn’t going to make it through the fall. Like her, he was indentured. Catherine said this evening that he had managed to nibble at his supper and keep down a little meat, but otherwise his complexion was bad and a few pieces of pork weren’t going to prevent him from withering away.

When Mary’s husband had returned tonight from the tavern, she had pretended she was asleep. He had stayed extra late. She had felt him looking at her, but she knew that he wasn’t going to wake her to apologize for striking her earlier that evening. (And he certainly hadn’t been watching her because he had been contemplating the idea they would couple. There wasn’t a prayer of that, not after all he had probably drunk.) Over the years, a pattern had emerged. He’d drink, he’d hit her, and he’d go away to drink some more. The next day, he would say he was sorry. She presumed he would apologize in the morning for hitting her again tonight. He would insist on his own sinfulness before leaving for church. She recalled what they had squabbled about: the garden looked weedy and unruly, and he felt it reflected badly on him. At least that was how it began. She knew he had other demons that pricked him with tines as sharp as needles.

Thomas was forty-five, not twice her age, but close enough. She was his second wife, his first--the former Anne Drury--having died eight years ago, soon after Mary’s own family had arrived in the colony, when Thomas’s horse had kicked her in the jaw and snapped her neck. Thomas had shot the animal that night, even though it had been a docile beast until that terrible evening. He and Anne had had three children together, two of whom had died young, but a third, Peregrine, was an adult now. The woman had married only weeks before Mary herself had wed Peregrine’s father. Consequently, Mary had never lived under the same roof with her, and given the reality that the two were contemporaries, she was glad. After all, she was both Peregrine’s stepmother and her peer: she couldn’t imagine having to discipline someone almost her age. Peregrine was more like a stepsister than a stepdaughter, albeit a stepsister who, Mary suspected, didn’t much like her for the simple reason that she wasn’t Anne. Peregrine now had children of her own, which meant that Mary, though only twenty-four, was a grandmother. The idea on occasion left her doleful and reeling.

She closed her eyes and listened to the sounds of the autumn night. There were still leaves on the trees in the marketplace and the commons that hadn’t been girdled, but soon those leaves, too, would fall, and there would probably be a killing frost as soon as the moon was full. It was well beyond half now. She touched the spot on her face where Thomas had hit her, aware that people might ask what had happened in the morning. Then, while conjuring a reason for the bruise that she could tell them, she fell into a deep sleep.

I know the taverns and ordinaries. That is no secret and nothing for which I need either this court’s or the Lord’s forgiveness. But have I ever been fined for too much drink? No. Hast thou ever lashed me publicly for such offense? Of course not. This court knows me, it knows my mill. And, yes, though there is evil within me and my heart is inclined to sin; though I have reason often to be ashamed before God; the truth is that I have tried always to glorify God in all things. Though I will have many failures to answer for in the end, my comportment toward my wife, Mary Deerfield, will not be among them.

--The Testimony of Thomas Deerfield, from the Records and Files of the Court of Assistants, Boston, Massachusetts, 1662, Volume III

Excerpted from Hour of the Witch by Chris Bohjalian. Copyright © 2021 by Quaker Village Books LLC. All rights reserved. No part of this excerpt may be reproduced or reprinted without permission in writing from the publisher.

Hour of the Witch by Chris Bohjalian is coming to our shelves soon! You may pre-order below and stay tuned on our social media handles for when it's released!