What happens when fantasy tears the screen of the everyday to wake us up? Could that waking be our end?

In Bliss Montage, Ling Ma brings us eight wildly different tales of people making their way through the madness and reality of our collective delusions: love and loneliness, connection and possession, friendship, motherhood, the idea of home. A woman lives in a house with all her ex-boyfriends. A toxic friendship grows up around a drug that makes you invisible. An ancient ritual might heal you of anything—if you bury yourself alive.

These and other scenarios investigate the ways that the outlandish and the ordinary are shockingly, deceptively, heartbreakingly alike. 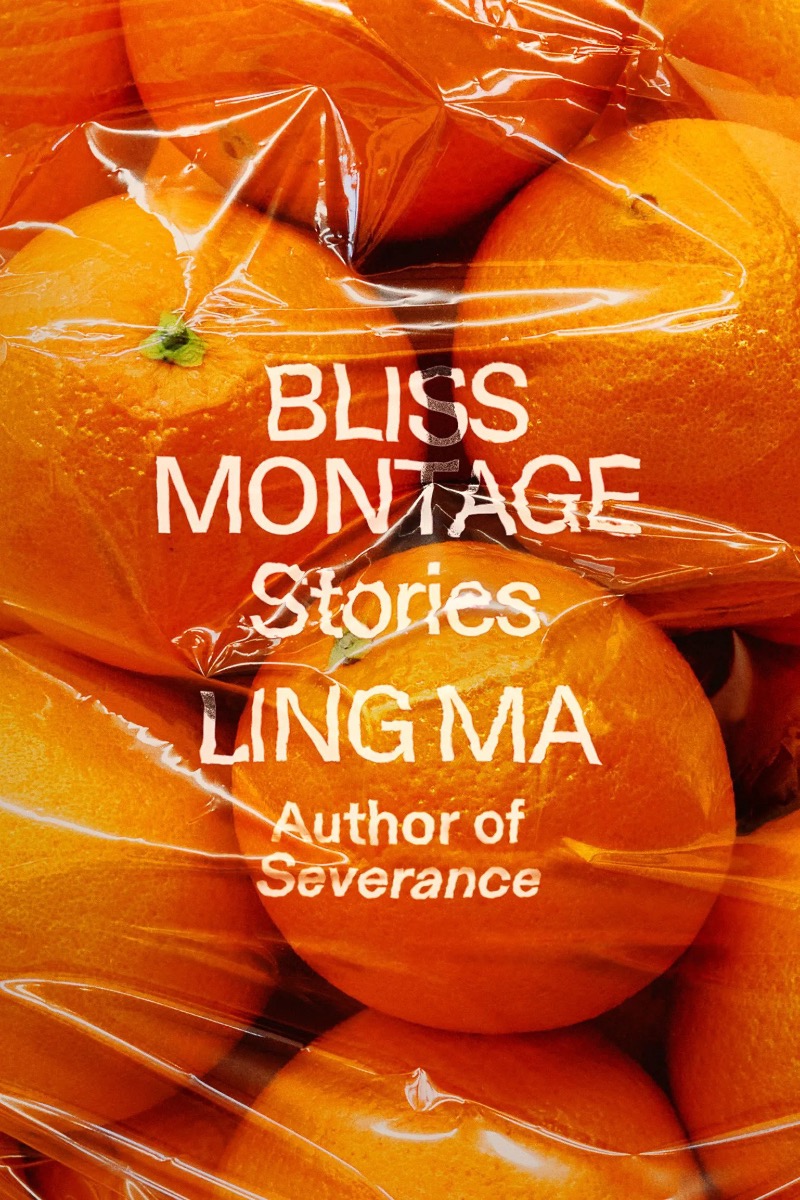 The house in which we live has three wings. The west wing is where the Husband and I live. The east wing is where the children and their attending au pairs live. And lastly, the largest but ugliest wing, extending behind the house like a gnarled, broken arm, is where my 100 ex-boyfriends live. We live in LA.

Our house has the nicest view in the Hills. From our Spanish-tiled kitchen, I can see my old apartment complex down the hill, a coral stucco converted motel. The burned-out sign says EL PARAISO. Another girl lives in my studio now. In T-shirt and slip, she drinks a glass of juice, stands hunched over the sink in the kitchen that I painted seafoam green. It is three in the morning, it is three in the afternoon.

She is there, I am here, and all my ex-boyfriends who dated me there are also here. Aaron. Adam. Akihiko. Alejandro. Anders. Andrew. Those are just the As.

My 100 ex-boyfriends and I hang out every day. We get into the Porsche 911 Turbo S, bunching into it as if it were a clown car, and drive down roads and boulevards, hills and canyons, palm-frond-strewn avenues, and parking garages of shopping malls. Geoff drives. The city sprawls out endlessly. Bougainvillea the color of bruises grows across people’s fences. Sometimes, a bamboo grove. Sometimes, a cemetery. Sometimes, a free clinic devoted to the removal of burst capillaries. The sun hits our faces, our eyes squint in the light, our hair billows in the wind.

On the Husband’s credit card: 101 burgers at Umami Burger, 101 admission tickets to LACMA, 101 golden milks at Moon Juice. We go shopping. We go to Barneys. We go to Koreatown. We go to Urth Caffé to do some light reading.

Can I get an extra wheatgrass shot? Benoît says.

Does this hoodie make me look fat? Fred says.

It’s almost time for us to go home, Chang says.

And Aaron, he doesn’t say anything. Neither does Adam.

It is almost evening by the time we return to our gated community, the sky a layer cake of pinks and oranges. At the security booth, a black iron gate lifts for us, heavy with its own weight.

After we’ve disembarked, the Husband returns home from the investment firm. He comes in quietly, through our noiseless garage door. I know it’s him when I hear the sound of ice clinking against glass, then bourbon pouring, glugging as it leaves the bottle. He lets it sit for a bit.

Well, did it go up or down?

Does that mean you’re working this weekend?

The Husband is a resting place. He is a chair. Sometimes I drape myself over him and I get the physical comfort of not being alone. I can feel it anytime I want; mostly Saturday nights, mostly Sunday mornings. But the times I need it most are the early evenings when I feel like I am dissolving. During this time, my ex-boyfriends scatter, and the Husband and I go somewhere for dinner.

I put on my plane coat, and we take the time-share jet up to Marin County. By eight, we descend into Sausalito, where Danielle Steel lives, where moody conifers grow on steep hills, and the expanse of the deep bay laps at rocks along the shore. It’s pretty here, but the only place to shop is Benetton.

At the slow-food restaurant on the harbor, an older couple at the next table beams our way. It takes a moment to see that we look like a younger version of them, sans their matching sweater vests and silvered hair. Between our tables, a span of thirty years. I return their smiles and look away.

The Husband sips his wine, eats his veal while I tell him about the things my ex-boyfriends and I did all day, the art we saw, the items we bought. Dessert arrives, a vanilla torte with raspberry coulis and mascarpone cream.

I try to enjoy it, but I can’t seem to escape the gaze of the couple at the next table. The wife, she can’t help herself. She leans over, puts her hand on my wrist, says, You will produce beautiful children.

That’s been done, I tell her, taking my hand away.

I have one son and one daughter, one gang-bangingly after the other. One is six and the other seven. They look and act so much like the Husband. They chew with their mouths closed, they know the correct fork to use. At night, they crawl into my lap, full of easily disclosed secrets, light as folding chairs.

At home, when the daughter spills raspberry juice on the carpet, the son chides, This is why we can’t have nice things.

No, that’s not true, I tell them, looking at the daughter. You can have everything.

There is nothing you ever have to give up, I say, pretty sure this is the wrong thing to say to a six-year-old but saying it anyway. You can have your cake and eat it too.

I can have my juice and spill it too?

Sure. Good use of analogy.

But Aaron, he doesn’t say anything. Neither does Adam.

There are 100 ex-boyfriends, but two that really matter. Their names are similar: Aaron and Adam. Adam and Aaron. Aaron because I was in love, Adam because he beat me. I met Adam first, then Aaron. The wound, then the salve. Maybe you don’t know that you’re wounded until you receive the salve. The salve that makes everything come back. After you get beaten, you don’t go out. Your face swells into a snout. You don’t buy Tylenol or groceries, because you’d look like an animal loosened onto the streets. Animal control would mistake you for something else. Instead, I stayed indoors. I washed the blood off the walls and the sheets. The splattered pillow I kept as evidence, not for anyone else, just for myself. I listened to music. Cat Power, The Covers Record. I caught up on my reading. From Primer to Abuse: Practiced abusers don’t hit a woman in the face. The novice abuser is pushed to it only by extreme, uncontrollable conditions. I read it again. Not “conditions”; “emotions.” I brushed up on philosophy: To live is to exist within time. To remember is to negate time.

All of my remembering begins late in the afternoon and lasts late into the night. How do I know, Adam once asked before he struck me, if what you feel is real? And not something you felt for everyone else that came before? And everyone that will come after?

After dinner, the Husband and I take the time-share back to LA. It is dark as we sweep across the wingspan of California. Below us, the lights go on, city by city, time passing. LA is so beautiful at night from afar, a constellation of stars. It sprawls out and around, not so much a city as a series of urban planning decisions made without foresight. Frank Lloyd Wright mansions give way to Le Corbusier–style churches, mid-century bungalows cohabit with Mediterranean villas, pleasure palaces rub up against ascetic lifestyle centers. There is no pattern, there is no meaning.

Beneath the plane blanket, the Husband’s hand finds mine.

How can I not be? I answer, and squeeze his hand.

When we return to the house, the kids are both asleep. The Husband retreats to our bedroom, and I to the guest cottage, where I spend most nights. We used to rent it, but it’s empty now. A winding stone path leads me there through the sprawling backyard, through thickets of bougainvillea bushes sneezing with pollinic blooms. The cottage is furnished with pieces that previous tenants left behind: a chair, a bed, a treadmill. I open up the windows and walk on the treadmill while reading old issues of fashion magazines.

Someone knocks on the door.

Bliss Montage by Ling Ma is coming to our shelves soon. You may pre-order below and stay tuned on our social media handles for when it's released!