If You Like This Song, Read This Book – Filipino Edition

Have you ever had the experience of reading a book when a particular song comes to mind? Yes, we get you, bookworm! As we Read Filipino this August to highlight the vast, unique experiences and cultures of Filipinos, no matter where they are in the world, we also have some Original Pinoy Music (OPM) songs you can check out while browsing through the pages.

In celebration of Filipino Reads Fest, here are Pinoy book-and-song pairings we think are worth adding to your to-be-read lists and Spotify playlists. 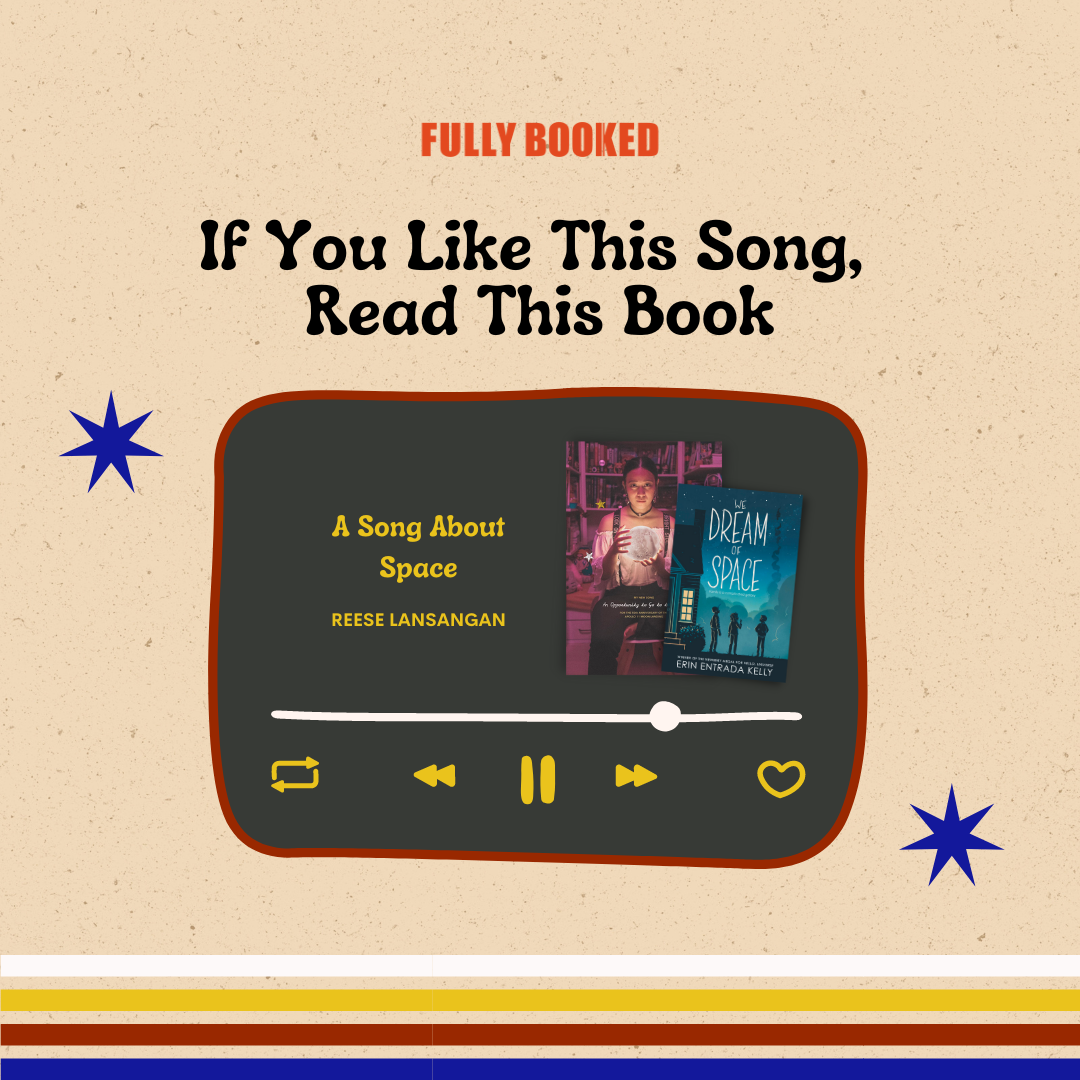 A Song About Space by Reese Lansangan

We Dream of Space by Erin Entrada Kelly

A Song About Space by Reese Lansangan—which was also featured in NASA’s #LaunchAmerica campaign in 2020—is the ultimate pair for this thematically rich novel. Similarly to one of the lines in the song, “Swimming inside my own galaxy,” We Dream of Space’s Cash, Fitch, and Bird Nelson Thomas also exist in their own orbits with little in common except an enthusiastic science teacher—the reason why their lives will bring them together in unexpected ways. 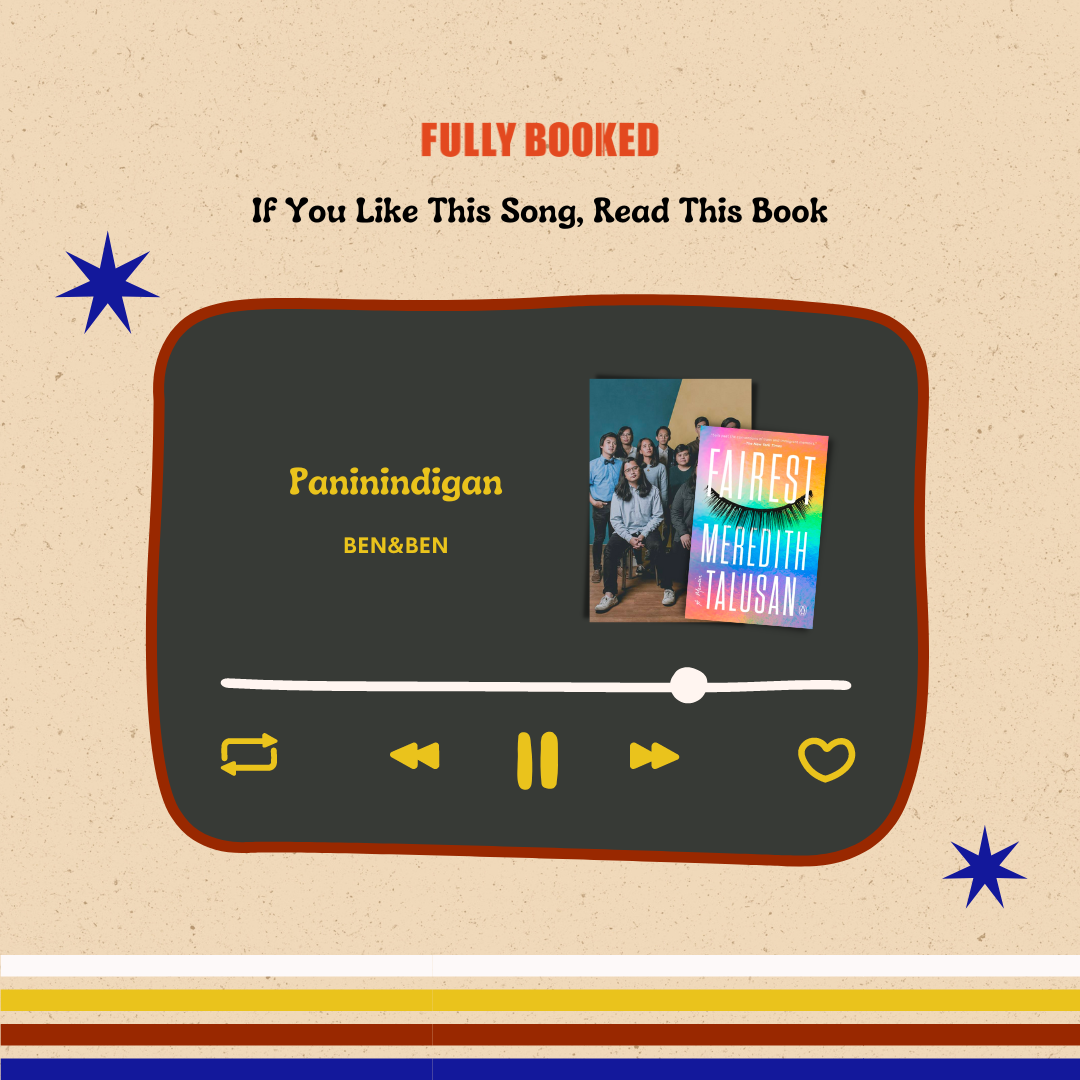 Both Meredith Talusan’s Fairest and Ben&Ben’s Paninindigan celebrate love: a kind of love that is celebrated and shared by all. Fairest is a coming-of-age memoir of a Filipino boy with albinism who would grow up to become a woman in America while Paninindigan is about expressing persistence in pursuing romantic love by taking inspiration from the love story of the band’s keyboardist Pat Lasaten and bassist Agnes Romea.

Be inspired by the beautifully written novel Fairest which illuminates the illusions of race, disability, and gender while listening to Ben&Ben’s hit single Paninindigan. 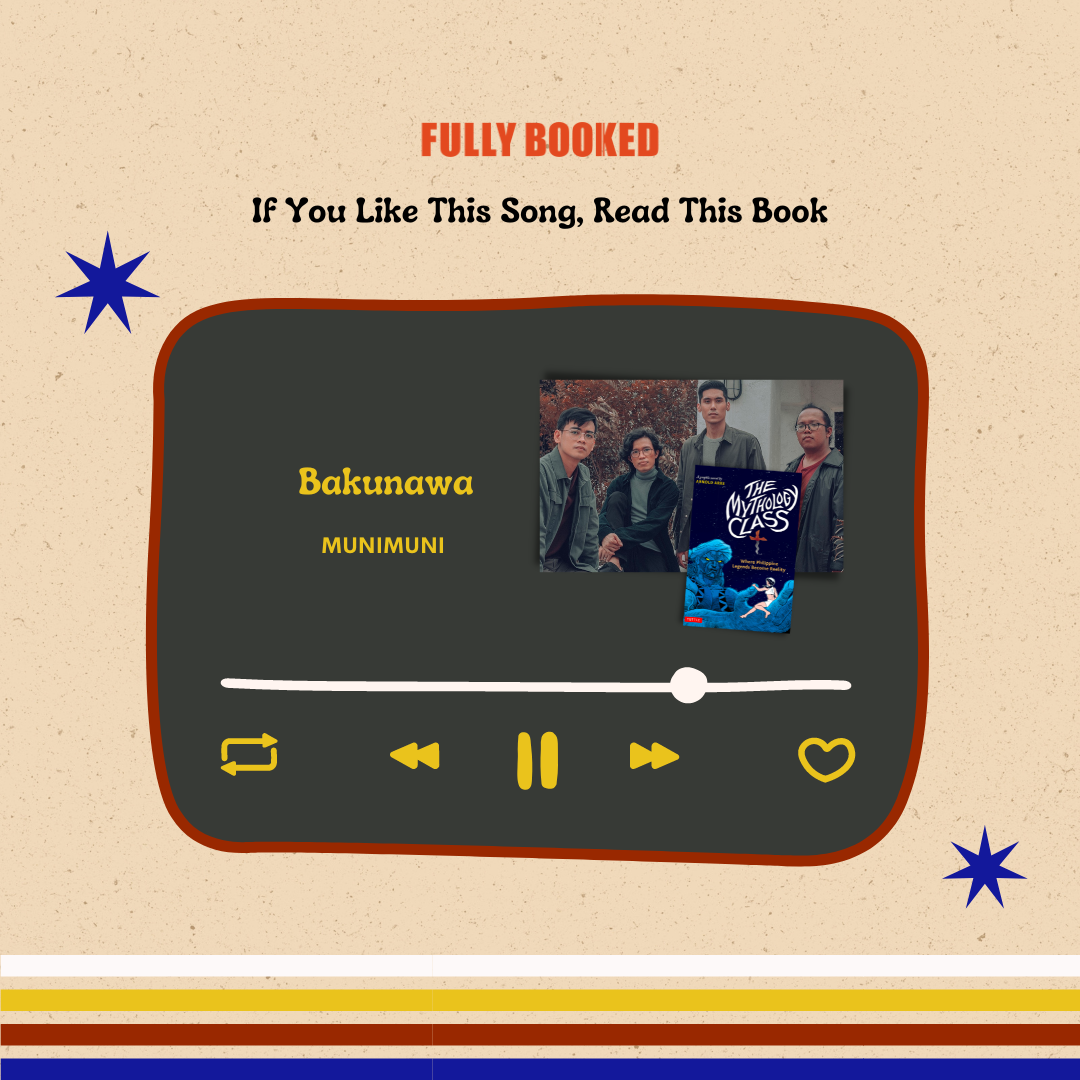 Know more about Philippine mythology with The Mythology Class while singing to Bakunwa. 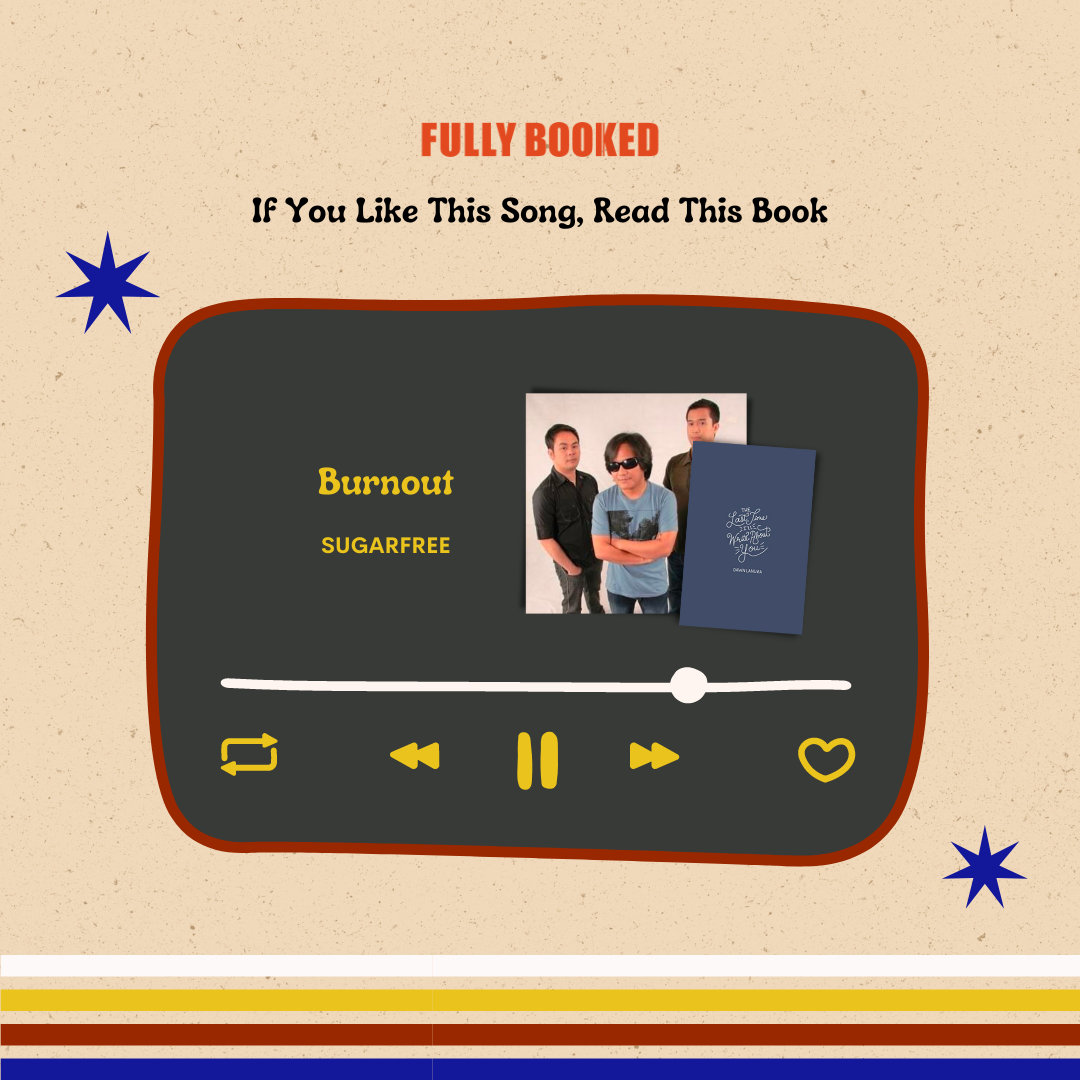 The Last Time I’ll Write About You by Dawn Lanuza

OPM icon Sugarfree’s Burnout is a lost love’s life anthem with its heartbreaking lyrics hiding beneath the song’s upbeat melody. This makes it the apt soundtrack to The Last Time I’ll Write About You — Dawn Lanuza’s debut collection of beautiful and relatable poems about first love; the perfect companion for anyone who has loved, lost, and emerged anew. Burnout and The Last Time I’ll Write About You teach us to have the courage to say what we truly feel; both promise to love beyond flaws and convenience, even if it means reaching a dead end. 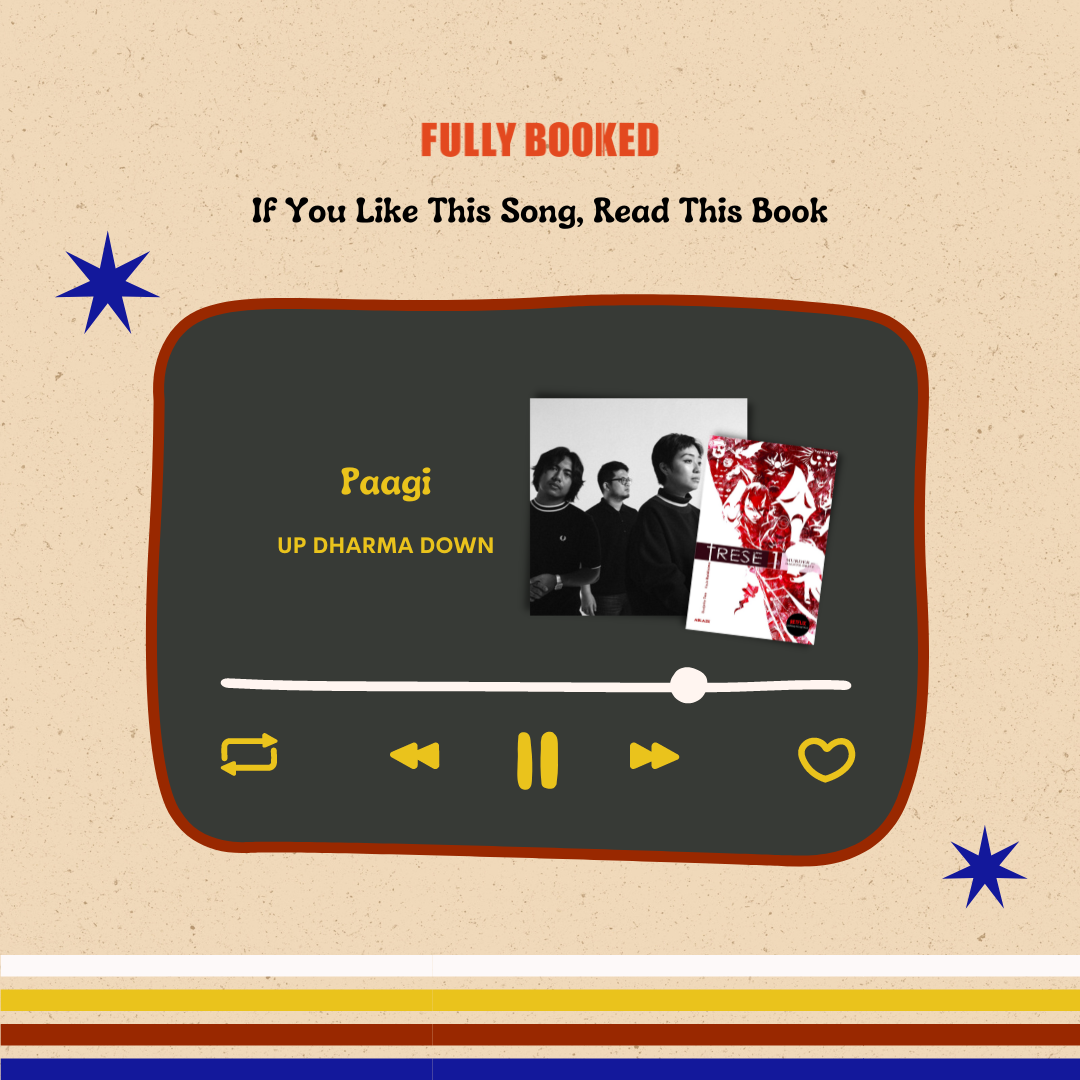 Paagi by Up Dharma Down

There is no song suitable to pair with Trese other than Up Dharma Down’s Paagi, which translates to “excuse me” in English or “tabi-tabi po” in Bisaya. Why? Simply because Paagi is the theme song of the Netflix anime adaptation of Trese! Writer Budjette Tan and illustrator Kajo Baldisimo’s award-winning Filipino comic book series tells the story of Alexandra Trese, a detective who deals with crimes of supernatural origin. Netflix Philippines even released a video of Up Dharma Down performing Paagi as part of their promotion for the adaptation. Watch it here. 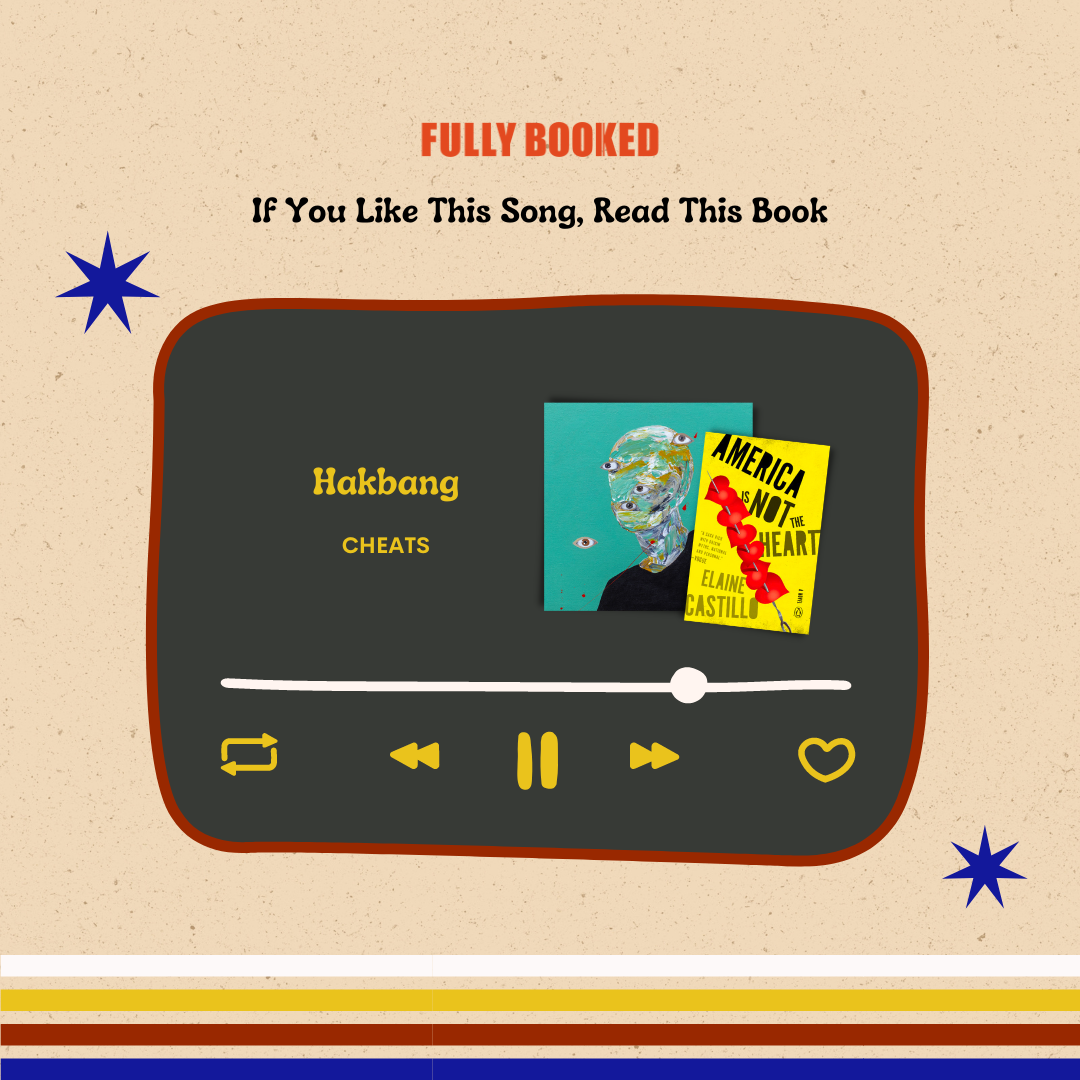 America Is Not the Heart by Elaine Castillo

Hakbang is performed by the seven-piece indie rock band Cheats who is known for their songs Accidents and Newspaper Girl. The song is a reflection of what a couple goes through during the pandemic, while America Is Not the Heart talks about three generations of women from one immigrant family trying to reconcile the home they left behind with the life they’re building in America. Even if the book’s plot isn’t centered on a pandemic, both the song and Elaine Castillo’s novel share a common theme: the struggle of transitioning to an unfamiliar circumstance. So, if you pick up this highly-acclaimed novel, don’t forget to put Cheats’ Hakbang on full blast!

Get more books on Fully Booked Online. Free shipping applies for orders with a minimum purchase of Php 799 only.