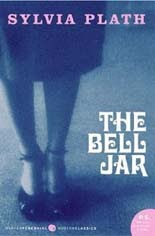 The Bell Jar is the semi-autobiographical novel of Sylvia Plath whose main author is Esther Greenwood, a young, talented and driven writer who was granted a scholarship and an editorial stint in a ladies magazine one summer in NYC. To the outside world, Esther is proper, brilliant, put-together. But the summer in NYC was the start of her descent to madness. Esther feels detached, disinterested and unable to have the slightest enjoyment to things that any nineteen year old away in the big city would normally feel. And yet she wakes up each day, putting up with conversations she didn’t want to participate in, events she couldn’t care less to go to and friendships she was starting not to care about. After her stint in NYC she goes back to her home in a suburb of to spend the rest of her summer and here she nurses her depression like a strong drink. The first thing to go was sleep, then her ability to write, her interest in reading and next her inability to hold a thought …”Everytime I tried to concentrate, my mind glided off, like a skater, into a large empty space, and pirouetted there, absently.” Through visits to her psychiatrist, shock therapy and a subsequent stay in an asylum, Esther struggles to get out of the bell jar that is constantly above her head, ready to descend and engulf her.

The Bell Jar can be sad if you want to just dwell on Esther’s depression. But more than that, Esther is hopeful as she waits and tries to get better and to be her old self again and I think aside from the serious tones of the novel, this is what it is really about. At a time when it was taboo to talk about depression and other feminist ideals, I find Sylvia Plath very brave and ahead of her time with the way she describes Esther and her thought processes. You can feel her brilliance shine through. 5 stars!