On a bitter-cold day, in the December of his junior year at Harvard, Sam Masur exits a subway car and sees, amid the hordes of people waiting on the platform, Sadie Green. He calls her name. For a moment, she pretends she hasn’t heard him, but then, she turns, and a game begins: a legendary collaboration that will launch them to stardom. These friends, intimates since childhood, borrow money, beg favors, and, before even graduating college, they have created their first blockbuster, Ichigo. Overnight, the world is theirs. Not even twenty-five years old, Sam and Sadie are brilliant, successful, and rich, but these qualities won’t protect them from their own creative ambitions or the betrayals of their hearts.

Spanning thirty years, from Cambridge, Massachusetts, to Venice Beach, California, and lands in between and far beyond, Gabrielle Zevin’s Tomorrow, and Tomorrow, and Tomorrow is a dazzling and intricately imagined novel that examines the multifarious nature of identity, disability, failure, the redemptive possibilities in play, and above all, our need to connect: to be loved and to love. Yes, it is a love story, but it is not one you have read before.

What was your first experience with video games?

As you sat down to write this book, who came first: Sam Masur or Sadie Green?

In most meaningful ways, they were born at the same time. I can’t imagine one existing without the other. But technically speaking, I believe Sam had a name before Sadie had a name.

Sam and Sadie are closer to each other than anyone else in their lives, and yet they are not lovers, not married people, sometimes not even friends. At one point in the novel, Sadie is proposed to by someone, and she says she doesn’t believe in marriage. The truth is she cannot be married to anyone else, because in a sense she is married to Sam. They are work spouses, but what’s a work spouse when your work is your whole life?

Their working relationship? Sadie is more ambitious and restless creatively. Sam is more interested in connecting with an audience and connecting in general. I think they feed off each other and push each other and give each other certain qualities that the other lacks. Their creative partnership is fraught, but I think they are better together than they would be apart.

Were there any real-life video games you drew inspiration from while writing about the ones developed by your characters in the book (EmilyBlaster, Ichigo, Pioneers, Mapletown)?

A ton, and I’m warning you that this list will not comprehensive! EmilyBlaster is inspired by Math Blaster! a math game I played as a kid in the 80s. It needed to be the kind of thing 90s era Sadie could invent for her seminar the night before it was due. Ichigo is inspired by early Nintendo games, like Mario or Zelda, and the PC game, Commander Keen.

Pioneers is, of course, Oregon Trail, but also, Stardew Valley and a series of games set in the old west called Westward. I wanted the narrative of Pioneers to feel like a muddy dress movie, like Portrait of a Lady on Fire. Our Infinite Days is closest to The Last of Us but was additionally inspired by books like The Road and Station Eleven. Mapleworld is significantly The Sims, Harvest Moon, EverQuest, and Animal Crossing. Dov’s game, Dead Sea, is a combination of BioShock, Left 4 Dead, and Resident Evil.

Can you discuss the inspiration for the title?

The title of Tomorrow, and Tomorrow, and Tomorrow derives from Macbeth’s famous Act V soliloquy. It is one of the bleakest speeches in all of Shakespeare, but Marx, the character who invokes it in my book finds great hope in it—the idea that we might start again every day of our lives—and a metaphor for playing video games with their infinite restarts, extra lives, and chances for redemption. 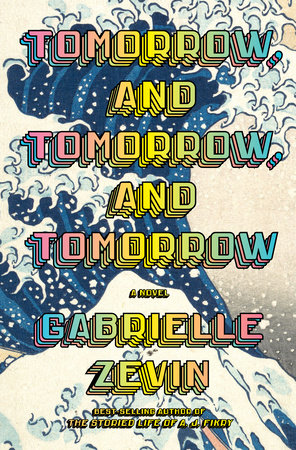 Someone asked me this question recently, and I felt stumped. I think it’s because I’ve had a different process on every book. And to an extent, I accept that I have noprocess. For me, part of writing the book comes down to finding the process to write the book.

But to speak in generalities: The beginning is the hardest part for me; I think it’s because it is difficult to write people you don’t yet know. I like to imagine the ending of the book early on, but I never know the actual ending until I get to it. I work early and I like to be well rested. I read over all the work I have done every day before I start (until the point at which the book becomes too long for me to do that.) I try to be as open as I can and I try to fully give myself over to the project of the novel, come what may. I live in the world, and I try to make sense of and respond to the things I see in the world through art.

We live during a time when there seem to be endless ways to connect online: Zoom, FaceTime, Google Meet, Twitch, TikTok, Twitter, Clubhouse, Instagram, and all of the other—seemingly infinite—virtual spaces. To what extent do you miss the early days of the internet?

I miss the fact that we had no idea what all of this was going to become. I miss the sense of possibility. At first, it seemed innocent—Wow, I can make friends from some other town? That’s cool! In high school, I remember driving to a town fifty miles to the north, with my friend, to meet some guy she was exchanging messages with on a Prodigy board (Google it!)—and you know, he was exactly who he said he was. It hadn’t yet occurred to anyone to pretend to be someone different!

And this isn’t your question, but I often remind myself that all the social media platforms are still young (some of them, like Prodigy, won’t survive), and we arestill young in terms of our relationship with them. It is tempting to be nostalgic and nihilistic, but I try not to give myself over to those emotions. We cannot always predict what will be from what has been. (Even if that’s the point of most online algorithms!)

So, I’m quite hopeful. At some point in my book, Sam says that “It is not an inevitability that we should be the worst versions of ourselves behind the mask of an avatar.” And I agree. But I think we have to acknowledge that our goals as humans and the platform’s goals are often not aligned. Because of this, the ethical demands on people using social media platforms are greater than they first appear.

And here’s where I mention that I use almost no social media. I’ll choose a platform for the three months before and after I have a book coming out, and that’s it. I find I can’t write well when I’m online too much.

What are you working on next?

I’m currently writing the screenplay for the movie version of. And after that, I have a novel I want to write—it’s an idea I’ve been turning over for a long time. I had a breakthrough for it last winter: I was inventing fake titles of books for an author character in another project. I looked at one of the fake titles I’d written down, and I thought, what is this book about? And then I imagined it.