We chat with Rin Chupeco, author of popular YA series such as The Girl from the Well and The Bone Witch, on her creating different worlds and writing in the middle of quarantine. Read our conversation below.

Fully Booked: What first drew you to writing fantasy? YA?

Rin Chupeco: As someone who'd always felt like an outsider, I never felt at home with contemporary fiction, mainly because I didn't have those same experiences as the characters depicted in those books. As someone who was very private and spent most of her time among books rather than among people, I found that I was living much more when it was vicariously through strange, unique worlds that were physically different from my own, yet shared the same fears and hopes. But a large number of those worlds I discovered through books were in the adult high fantasy genre – not necessarily the market for teenagers like me back then. And I'd always thought that I wanted to fill in that void should I ever be published, to write the books geared for people like teenaged me – books I would have liked to have read growing up.

Where do you usually get your inspiration for the worlds you build and stories you tell?

I don't actually know. I get a lot of my ideas from the strangest places, and I wouldn't have told you that was where I would have expected to get them. Sometimes me musing over something turns into something more concrete, like observing someone I don't know walking by inspires a new character, or that taking a shower without thinking much about anything suddenly supplies my mind with a complicated fully-fleshed out world. Some of my books are inspired by unexpected experiences I've had, such as a group of Japanese salarymen mistaking me for a ghost at one time (it became the inspiration for The Girl from the Well), or getting stuck in Boracay without power for days during Typhoon Yolanda (which became the source for The Never Tilting World). At this point I just try to keep my mind open and look at everything as a potential source for a story, but at the same time try not to focus on making them so.

The hardest thing about writing is also the easiest – putting down the idea into paper. The rush when you first envision a story idea and start planning it out in its early stages is always a huge rush for me, like a sudden barrage of endorphins directly into my brain. And then, eventually, the specifics of those ideas are what starts to bog me down – plot holes, other contradictions I didn't think of, better ideas that force me to rewrite half of the story, changes in narrator points of view that force me to rewrite the other half. It's hard work, but I find it very rewarding once I reach the end. Until I get there though, I am a creative chaotic mess, albeit in the best possible way that writers like me like to thrive on.

It varies with every book, but it usually starts with characters. I think about the kind of character I want to focus on as protagonists, and then I think about what that character would consider the worst thing to befall them. And then I imagine the kind of world they live in where that worst thing was very likely to happen, and then I build up my conflict from there. I usually focus on the bare bones of the story even when I start writing the chapters, and the specifics and the details of the setting reveal themselves to me while I'm already writing. I trust a lot on my subconsciousness to find the best way to tell the story while I'm already doing the chapters, because I usually get my best ideas when I'm in the scene's moment. 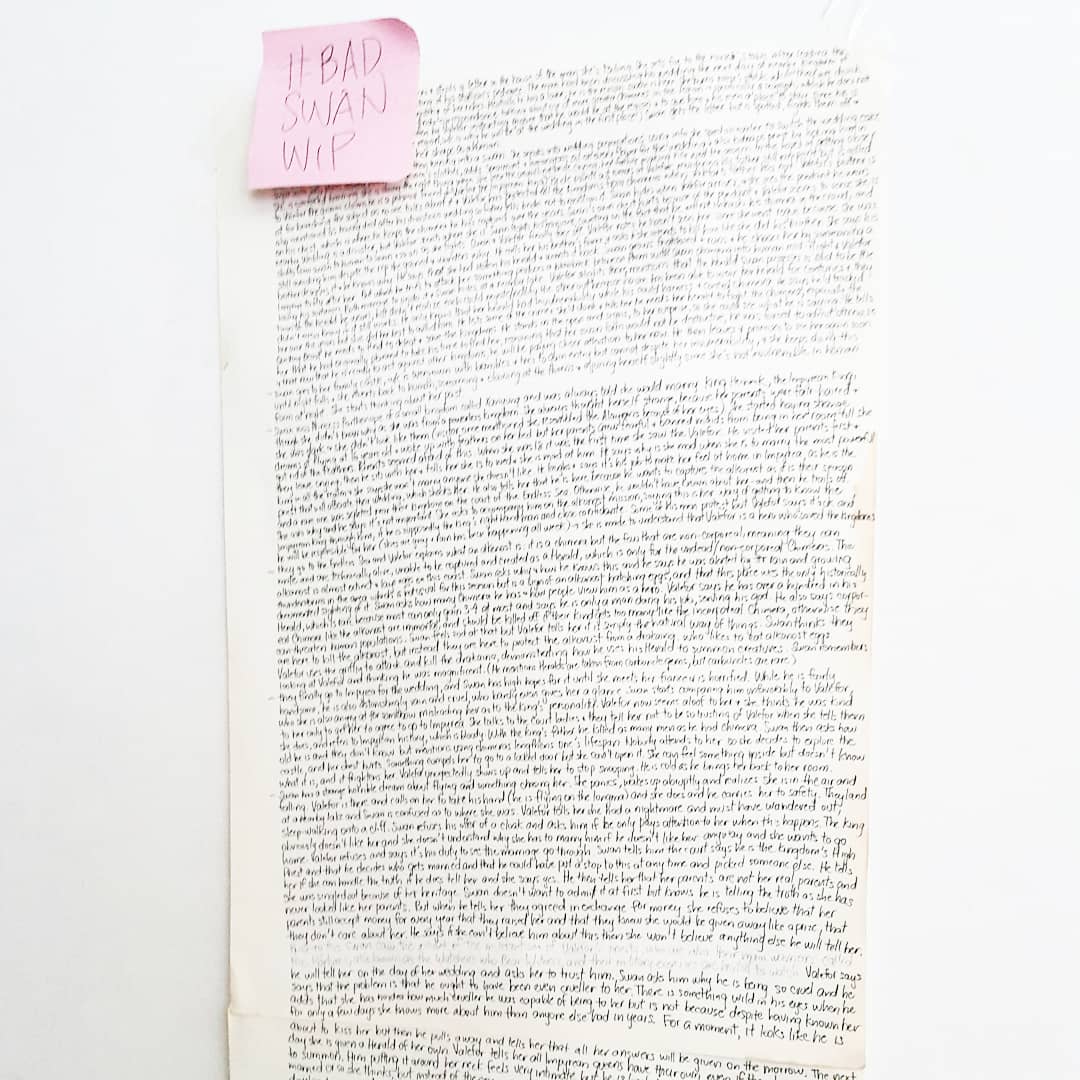 Normally I would wake up around 5:30 or 6 am and spend the next 30 mins or so staring up at the ceiling, not really thinking about anything at all. I find that when you're relaxed and not dwelling on the stuff you have to do for that day, ideas flood into your head whether you want them to or not. I often get concepts for new projects this way, or better, improved ideas for ongoing projects.

Then I do the usual mom stuff most mornings – preparing the kids for school/daycare, doing errands, etc. I always take a working lunch, which either means I whip up the quickest meal that I can so I have more time to write, or going out to a cafe where I'll spend the rest of the day on my laptop or iPad (I use both to write). My husband collects the kids on his way home from work, so that gives me more time. Once the kids are back though, I have little time to myself, so I spend the evenings feeding, bathing, and chasing them around till it's time for bed. I dedicate the hours after that to answering emails, being interviewed, and doing promo work my editors send me that I'm supposed to do before my book releases. That way, my emails will be one of the first things they see when they arrive to work at their offices in the US! I've been publishing a couple of books per year as of late, so the work from that alone does pile up! 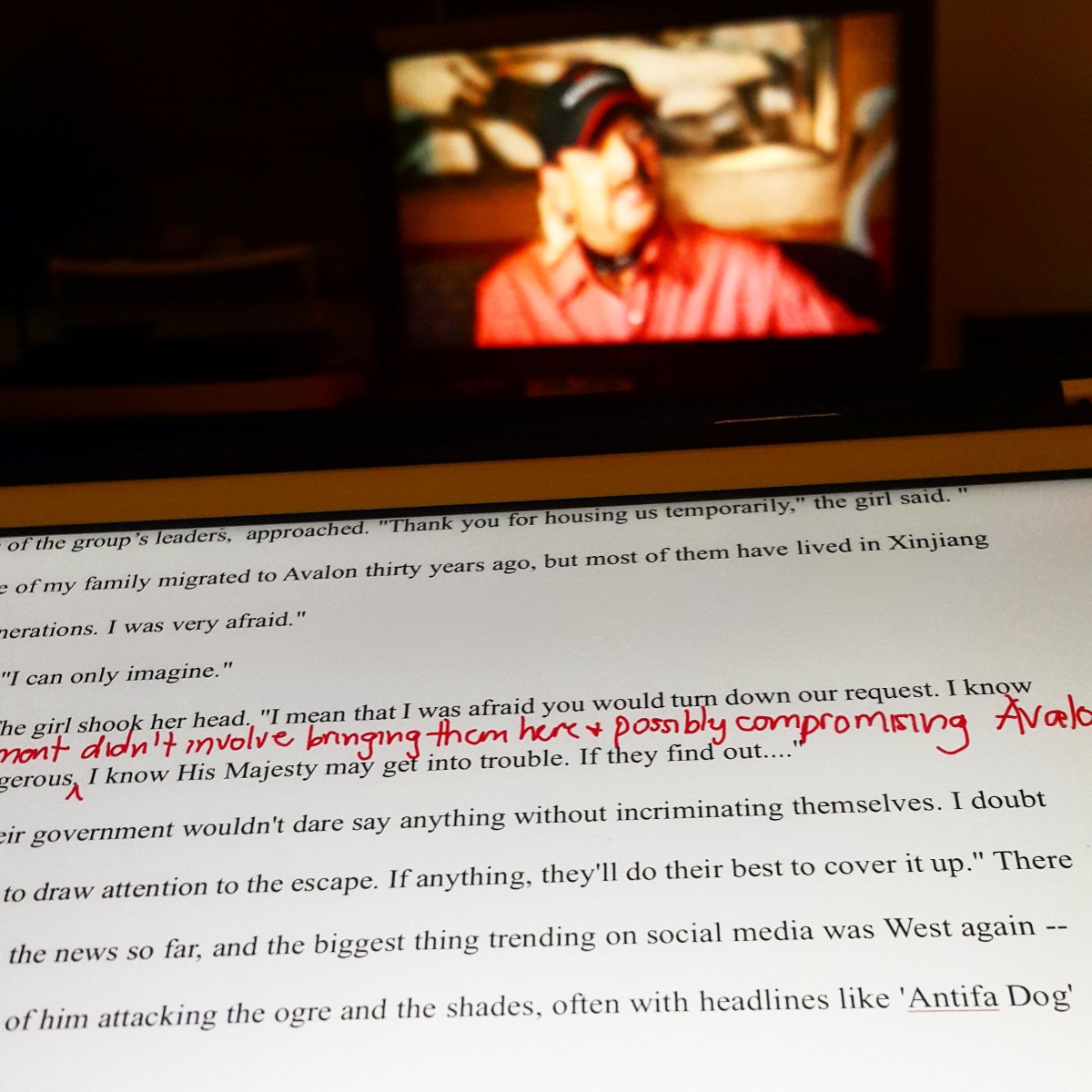 The lockdown (how dystopian is this new normal, now?) changed things. Since everyone's home there's less time to do work, but I take advantage of nap time. My husband also looks after the kids alone for a few hours while I write in the morning, then I take over while he finishes up his own work. It's slow going right now – you might think you can do more work during a quarantine, but that might only be applicable if you live alone without kids constantly underfoot! At this point, the most important thing is to keep your sanity, so I'm really firm about looking at my social media in the morning and then disabling the Wi-Fi on my laptop when I write afterward.

A very weird one – a short ghost story when I was in Grade 4, about a boy getting lost in the forest and headless things that are following him around. I remember scaring my classmates with it and feeling very pleased with my success at it.

My favorite book of all time has always been The Count of Monte Cristo, and I always make it a point to read it at least once a year or so, because I never grow tired of it. 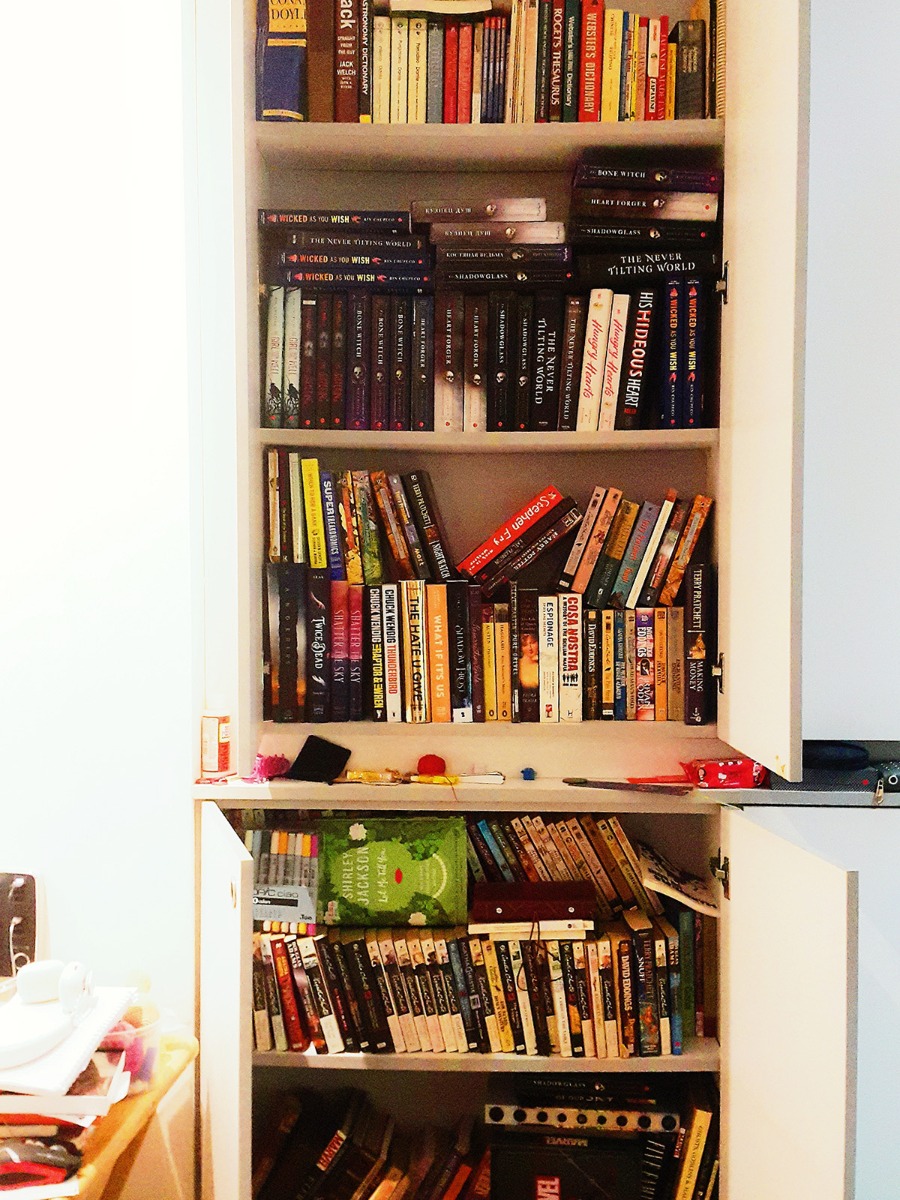 I'm rereading an advanced copy I have of Harrow the Ninth by Tasmyn Muir, the sequel to Gideon the Ninth.

I'm pretty loud and vocal online, but I am actually fairly quiet offline, and something of a loner. It's a little bit easier, I think, to share opinions when you're just another account in a sea of other social media accounts expressing satisfaction or dissatisfaction with the things going on with one's life, but I have always been the most comfortable when I am alone, and I've learned how to be alone and appreciate my own company, even in crowds.

Any advice for writers on how to cope with quarantine and the current state of the world?

I don't think anyone could have foreseen how greatly the extent of the COVID-19 and the lockdown could have made not just here, but all over the world, and I think that most writers feel pressured to write something or complete a work to feel productive when everything is on quarantine. I say that this is actually one of the least productive times to work, especially with all the anxiety we're all experiencing. What's most important right now is to find your peace of mind before anything else. This too shall pass; but what we all need right now is to find joy in anything that we are able to do while on lockdown, be it writing or just enjoying your favorite book or game or show, and – and this is what I want to emphasize – never feel guilty if you choose not to be productive. We're all trying to survive at this point, and that's the only thing you need to do. 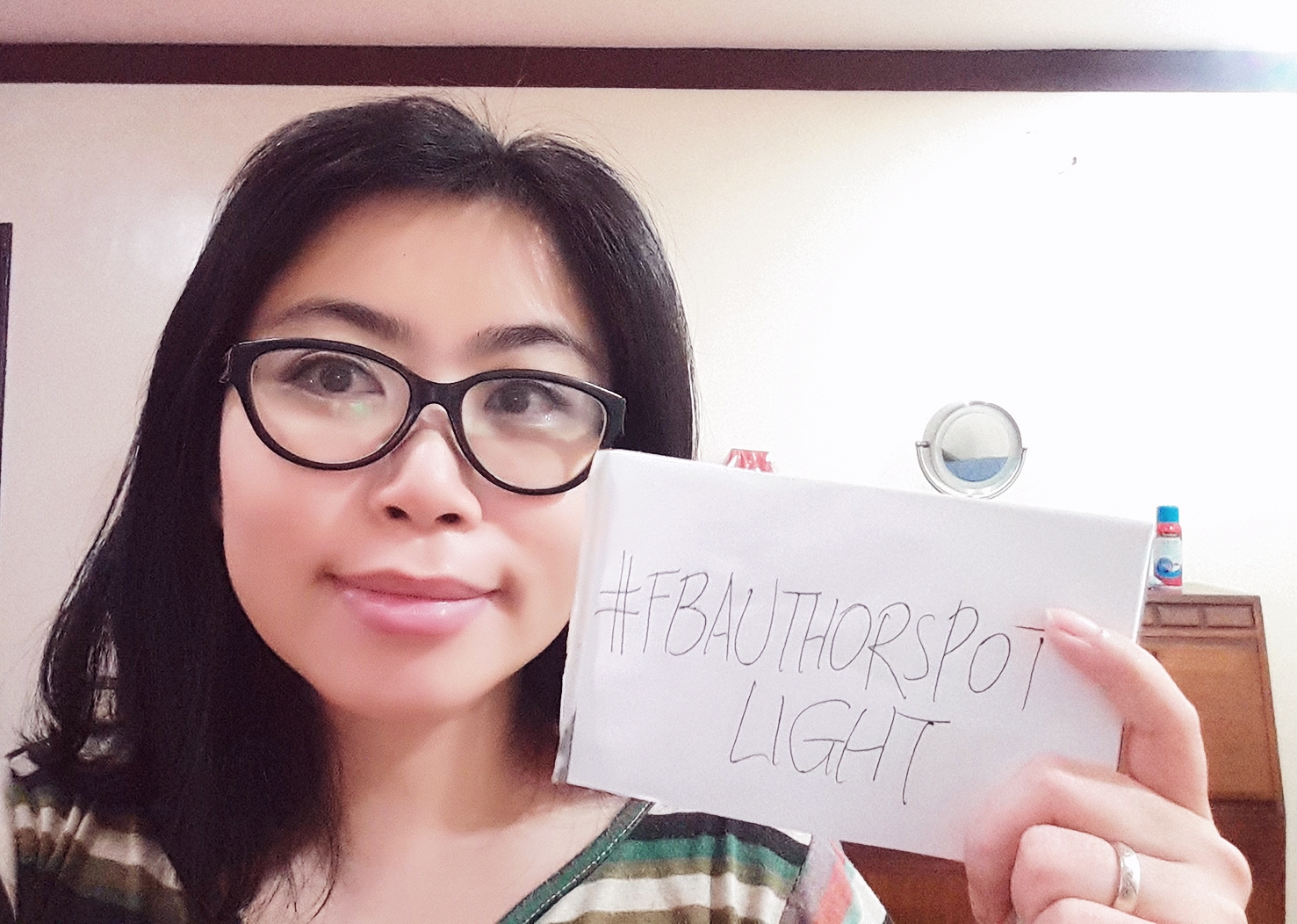 Get Rin Chupeco's books from Fully Booked Online. Send us an email at greatreads@fullybookedonline.com to order.