We chat with author Cookie Hiponia Everman about Philippine mythology, poetry, and her life as a writer. Read our conversation below.

What prompted you to write We Belong?

For years I had looked for books to read to my kids that had representation of them, half-Pilipino and half-white kids, but I never really found one that reflected our family's story. So I heeded Toni Morrison, who said "If there's a book that you want to read, but it hasn't been written yet, then you must write it." So that's what I did. I wrote a book that I could share with my hapa kids and other kids like them who have longed to see themselves in books.

Do you have a favourite Philippine Mythology story?

I think it may be the story of the sky maiden who is tricked by a mortal man into marrying him when he steals her wings so she can't fly away with her star sisters. It's known by so many different names in the Philippines, depending on who is telling it; I've heard it called "Star Wife" or "Sky Maiden Wife" or even sometimes it's named after the mortal man who deceives a demigoddess to get her to be his wife, like Terengati. I think I've now collected at least four versions of the story. It's such a powerful metaphor about men who feel like the only way they could be loved by a woman who is more powerful than they are is to trick her, strip her of her wings. That's not love; that's possession.

What first drew you to writing poetry?

The first poem I remember writing was about a ghost child inside me who was trying to invite me to play with her again. I remember that I liked how I could tell a whole story in just a few short lines. I've always been obsessed with music, and what are poems, really, but lyrics looking for a melody.

Where do you usually get your inspiration for the stories you tell?

The old adage "write what you know" is sort of true for me, but I write my stories to know more. To be honest, a lot of my work is designed as medicine, which is what Indigenous people of the Americas call things that are meant to heal. WE BELONG, for example, is all about healing family strife and intergenerational trauma. For inspiration, I live life loudly, love people unabashedly, and read voraciously. I don't even have to go looking for stories when I do those things; the stories come find me.

My writing process is organized chaos. I don't write linearly, and lockdown conditions have exacerbated that. I'm divorced and I got my kids every other week during lockdown. When I'm with them, between online school management and household chores and errands, it's a minor miracle if I get four solid hours in a row where I just write. I jot ideas and sometimes entire scenes or dialogue on post-it notes because I'm always multi-tasking, but even more so when I have my kids. I do set aside most Tuesdays as my "research" days when I don't schedule anything or try to write in big chunks. I just read and take notes. I have a wall designated as my Work in Progress (WIP) wall where I tack up post-it notes that I write when the lightning strikes. I'm not consistent with the notes, either. For my next middle-grade book, for example, the post-its are arranged neatly and color-coordinated. But for my Secret WIP, I have notes on old grocery lists and recycled scraps, whatever I could get my hands on at the time. So I tack all these notes up on the wall and put on music, just my entire discography on shuffle. As I'm looking at the notes and touching them (I'm weirdly tactile), and the music is playing, sometimes a line in a song will hit and I'll go "Ah! That's what this scene is about: the feeling that nobody will love you as you are, so you have to just love yourself." At that point, when a song captures the idea in whatever note I was touching, I start a soundtrack for that WIP. As I keep plotting the story, I keep finding new songs to add to the soundtrack and as I write, I start rearranging songs chronologically to the story that's evolving. When I get into a writing groove, I sometimes write up to 5 chapters in one day. But sometimes I write half a chapter in one WIP and get a better idea for another WIP, so I jump to that one until I get some other idea for the WIP I was working on originally. Did I mention it's organized chaos? Yeah. That.

The first story I ever wrote that had a complete narrative arc was actually what the kids today call a "fanfic" about John F. Kennedy, Jr., that I wrote when  I was 13 . (Yeah, I know. Other girls in my class were crushing on Kirk Cameron and I loved JFK Jr. The heart wants what it wants.) I wrote the story in a journal with a teddy bear on the front. The structure, pacing, and phrasing was TERRIBLE! But I liked the story and the way I followed the rom-com tropes of meet-cute and get the girl, lose the girl, get the girl back. It was a whole thing.

THE RED TENT by Anita Diamant. I think I've read it five times now. I was raised Catholic and the story of Dinnah always bothered me, so I loved that this book found a crack in the story where we could shine some sunlight through and tell the story as the women of the Bible might have told it. With WE BELONG, I found some cracks in the myths of Araw and Buan and Bathala that I could shine some sunlight through and tell the story of Buan from Buan's POV. Everyone always remembers the bit about Araw taking Buan's eye out, but I don't think I've ever heard anyone make the most logical conclusion: that the Moon Goddess was such a fierce warrior, the Sun God had to take her eye out to keep her from being the ball of fire in the sky.

My TBR list is way too long for any reasonable publication to list, so I'll spare you. I'm currently reading Never Look Back by Lilliam Rivera, which is a retelling of the Orpheus and Eurydice myth with Afro-Latinx characters, set in the Bronx. I've been loving it so much I can't bear to read the last three chapters yet because I don't want it to end the way I expect it to end.

I have 20/15 vision. The eye doctor said to my kids, "You know how moms say they have eyes in the back of their head? Your mom might actually be able to see you through the back of her head." I was both proud for myself and scared for my kids.

Live a life worth writing about. Take your time and don't compete against anyone but yourself.

How has the current state of the world affected your writing process? What would you advise writers and readers on coping?

I talked about this a little bit already in the writing process question, but the global pandemic and geopolitical chaos has made it so I don't know if any given day will be "write five chapters in one sitting" day or "can't even get out of bed because I've been doom-scrolling for two hours" day. It takes me longer to read books, too, because my head is full of the state of the world. I would advise writers and readers to cope by being kinder to yourself and others. Give everyone grace right now, most especially yourself. Capitalism has made it such that we feel like our value, our worth depends on our productivity. This is especially true in American society and culture, and we tend to feel like failures if we aren't constantly producing. It's been a year of pandemic, so it's been a year of me learning how to forgive myself for not producing as expected, and learning how to listen to my body, heart, and Soul and just take good care of myself and my kids. Nobody on their deathbed ever regrets not working enough.

Can you take a quick selfie for your readers in the Philippines? 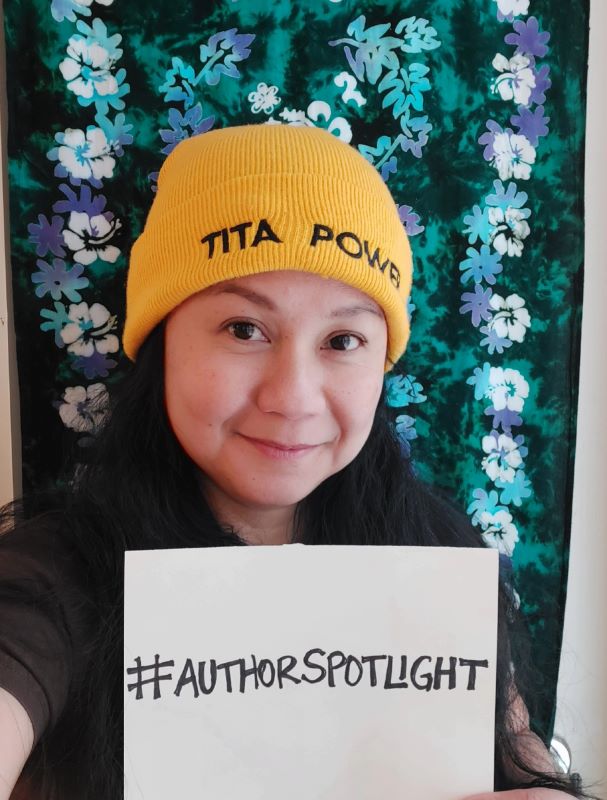