Eighteen-year-old Ava has saved the world 152 times—ever since she got her hands on her first console. It's all fun and games, but after a mysterious encounter with not-a-vampire Brad, she discovers that the mythological creatures she’s only ever seen in video games are actually totally real. As she's suddenly thrust into a quest with a surfer wendigo, a friendly manananggal, a telepathic nine-tailed fox, a Sudoku-loving centaur, and a huggable Bigfoot, Ava embarks on an actual mission to fend off an alien invasion—and she soon realizes that this time, she just might need to save the world for real. 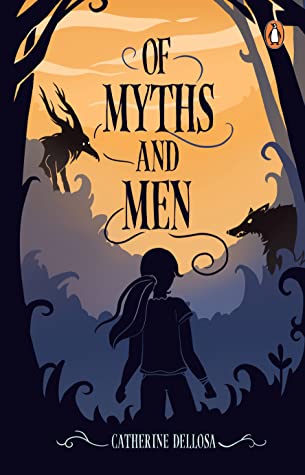 As we celebrate Read Filipino in August, we put the spotlight on local writers and illustrators. In this Author Spotlight, we asked Catherine Dellosa about her fascination with Philippine mythology, the creative process as a graphic novelist, and what's next after having to publish Of Myths and Men.

1. What's the inspiration behind your book Of Myths and Men? What do you want your readers to feel after reading your book?

The basic premise for Of Myths and Men was actually my husband's idea! We wanted to make sure kids wouldn't be afraid of these things that go bump in the night, so we wanted to portray mythological creatures in a different way in that they're actually on our side. Why do they always have to be the bad guys, right?

I started working on Of Myths and Men in 2015, so it's a bit of a passion project. I hope that readers will feel wonder and kilig after reading my book, and at the same time, feel like they too can go on their own epic quests to save the world in their own little way every day. Who says you have to be the so-called Chosen One to make a difference?

2. What made you decide on the theme of your book?

YA has always been my first love, so it was important for me to keep the story in that same genre. My previous works have all been contemporary, so for Of Myths and Men, I wanted to let my imagination go wild and explore worlds outside the ordinary but still very much grounded in the world we live in today - hence the low fantasy genre.

As for the main theme, there's a sense of found family here, finding where you belong and that what makes you different is what makes you unique. It's all about embracing what you love (which, in my protagonist's case, is video games) and using that as your personal tool to do good in your own way. I'm an avid gamer myself, and my day job is actually as a games journalist, so I'm in that headspace all the time!

3. When did you know that you want to be a writer?

When I was eight years old! I wrote this oddball of a horror story about a girl who could turn into a chicken. It was a handwritten piece on a few sheets of letter-sized paper, folded into a book and stapled at the spine. There was only one copy, and unfortunately, the ridiculous tale has fallen victim to the passage of time, lost in a sea of random junk I've gathered over the years. Since then, I've always written stories, whether for myself or for fanfiction fandoms way back when. I just can't imagine living a life without writing anything!

4. Tell us about your creative process.

This usually varies depending on the story - sometimes, I'd get a burst of inspiration for a plot; other times, it's the characters that present themselves to me first. They'd start talking inside my head, demanding for their stories to be told. I know that may sound a bit pretentious, but it's oddly true - these characters just start taking on a life of their own, and I can't help but want to tell their tale.

Once I start the actual writing, though, it's a matter of discipline and making sure I dedicate enough time in a week to add to it bit by bit until it's finished. Then, it's a long process of taking a break from it, asking awesome beta readers for their feedback, giving it another run-through for repetitive words and weak verbs, fixing glaring mistakes and so on. The editing process never truly ends, and it really does take a village. An author's amazing support group is the backbone of a polished story - they're the real heroes here.

5. Who is your biggest literary influence?

This is such a tough question to answer! When I was a kid, I started with the Sweet Valley books, then eventually read a lot of Chuck Palahniuk and Haruki Murakami as I grew up. I also absolutely devoured the entire Harry Potter series. I'm a huge comic book geek too, so Brad Meltzer's DC works are also an influence. I think all authors are a product of everything they've read over the years, so it's hard to pick just one influence.

The sense of family! It's not very often that you see tight-knit family ties in Western books - at least, not as closely knit as those in Filipino stories. The warmth of family - regardless of its form - is what makes each narrative piece shine brighter with a softer, cozier glow. It's the moments with family that make us feel like we're on top of the world. Despite our trembling hearts and elusive dreams and the ghost of a forgotten kiss, we somehow know that life is going to be okay.

7. What's the most challenging thing about being a Filipino writer?

It's definitely hard to overcome the hurdle of discrimination in the industry, especially since being a minority automatically brands you with certain expectations. People will expect you to write solely about your culture, but we're not defined by our cultures alone, are we? We can't be boxed by the limits of race. A Filipino writer can and should write about anything that pops into their mind, whether they're about fantastical worlds that have nothing to do with their culture or even the next Star Wars. You should be able to write about what you want to write, and not what commercial society wants you to write.

I've already said this before elsewhere, but it just bears repeating - we are not defined by our cultures alone. We're limited only by our own imagination. I'd also like to echo what a fellow Penguin author, Eva Wong Nava, once said - just because we're minorities doesn't mean we should be dubbed "authors of color". We're simply "authors", no matter the so-called color!

8. What are your top 3 recommended books by Filipino authors?

One of the most difficult things for me to do is to be asked to rank my favorite books! Let me give it a go: Wired Differently by Chris Mariano, Dwellers by Eliza Victoria, and This Side of Sunny by Agay Llanera.

Never stop learning. Keep honing your style and finding your voice. Buy books on the craft. Attend online courses. Writing is a neverending learning process, and with each new book you read and new story you write, you pick up a few things you may not even notice and develop your skills as you go along.

Keep your supportive BBFs close! It's also important to find your tribe (shoutout to the #romanceclass, BRUMultiverse, and Penguin YA fam!) to keep you sane as you go through the very solitary act of writing.

As for publishing, I hope you learn how to manage your expectations. I wish someone told me this as I was starting out. It's a long and often-heartbreaking process filled with the highest highs and the lowest lows. We all have to learn how to steel our fragile hearts if we're to survive the treacherous landscape of the industry, but if it's something you're truly passionate about, it is so, so worth it.

And when things come crashing down like they inevitably will sometimes, don't give up. Soon, you'll look back at how far you've come and be glad you kept trying. It's like how the film "tick, tick... BOOM!" puts it: "So what am I supposed to do now?" asks Jonathan Larson after he gets rejected, to which his agent simply says, "You start writing the next one."

Don't forget the Big Guy up there, of course!

I'm actually already working on Book Two for Of Myths and Men! It's going to be filled with more action, more emotion, and more mythological creatures in the midst of an alien invasion. My #romanceclass Flicker book, Raya and Grayson's Guide to Saving the World, is heading to Frankfurt Book Fair this year too thanks to our amazing National Book Development Board, so fingers crossed and lots of prayers that it'll hopefully get adapted into something! Plus, I've also got a few contemporary works brewing in here somewhere, so I hope that people will stay tuned!

Grab a copy of Of Myths and Men by Catherine Dellosa and other books authored by Filipinos on Fully Booked Online. Free shipping applies for a minimum order of Php 799 only. Happy reading!