The Mythology Class follows Nicole Lacson, an anthropology student at the University of the Philippines. When she is summoned to a secret meeting by the mysterious Madame Enkanta, Nicole finds herself face-to-face with living creatures from mythology and folklore that she never imagined existed in real life! Tikblangs, Kapres, and a range of engkantos--fantasy figures from her grandfather's bedtime stories--challenge her previously-held notions of reality. 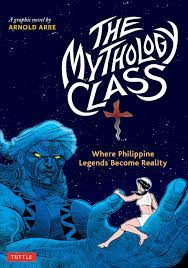 As we celebrate Read Filipino in August, we put the spotlight on local writers and illustrators. In this Author Spotlight, we asked Arnold Arre about his fascination with Philippine mythology, the creative process as a graphic novelist, and what's next after having to publish The Mythology Class.

1. What inspires your graphic novels? What do you want your readers to feel after reading your work?

I can say that most of my stories are inspired by personal experiences, opinions, and beliefs, and also a desire to tell a really compelling story. I want my readers to be more than satisfied long after they’ve put the book down. I’ve gotten messages where readers have said that they could relate to this or that character, or that they forgot about their troubles, or that they were emboldened, or that they even missed their bus stop because they were so immersed while reading my book, and I thought it was really wonderful to be able to resonate with them like that.

2. A lot of your work has mythical themes rooted in Filipino culture. What made you decide to focus on this?

I've always been fascinated with Philippine mythology ever since I saw a sculpture when I was very small. It was a creature I had not seen before - which I later found out was a tikbalang. In college, I would read F. Landa Jocano and Maximo Ramos books and felt hungry for more. In truth, I wanted to read a comic book on Philippine mythology but since I couldn't find one that was in-depth and contemporary enough that was closer to what I wanted, I ended up making my own. This was in 1997. It was also my intention to showcase our myths and legends and introduce them to the younger generation. Our culture is very rich with folk tales and “The Mythology Class” is my way of paying homage to those tales.

3.  When did you know that you wanted to be a writer?

It all began when I borrowed my brother’s Incredible Hulk vs. Doc Samson comic way back when I was 6 or 7. I’ve been fascinated with sequential art ever since.

Having gotten to know the medium of comics at an early age, I wanted to give it a test. I’d translate all the movies I watched into comics, doing my best to remember each scene so that I could draw them. I guess the desire to experience the movies all over again eventually led me to honing my skills in visual storytelling. (Remember, this was in the ‘70s when there was still no internet, and we also didn’t own a vcr so maybe the lack of resources helped too.)

4. Tell us about your creative process.

The overall concept of the story comes first, and then characters are developed along with how they will overcome the challenges within the story. Good drama is a result of these characters struggling and doing their best despite the odds being stacked against them.

Next, I will make an outline which will help me flesh out the details. This is not set in stone however since sometimes I jump straight in and draw several pages of scenes playing out in my head.

I work from late in the afternoon to evening and well into the wee hours of the morning. That’s when most of my ideas are born. I just try to focus on what I’m doing. For me night time is best for working and brainstorming, when there are less distractions.

5. Who is your biggest literary influence?

I greatly consider French artist, Jean “Moebius” Giraud, as my biggest influence, both in art and story. There was an article that I read about him where I was surprised to find out that The Airtight Garage series was created without any script nor outline and that he just allowed his imagination to run freely, letting the story write itself. That really impressed me.

These stories are about us, our culture, so we can easily relate to them. They are what we have and what we can share with the rest of the world. There’s nothing quite like our own. I always tell students in my lectures that telling our own stories is the best way to be original, and that is a guarantee. Who else is better at presenting our culture than us? We haven’t even mined the potential of our mythology and folklore - there are still so many stories left untapped.

7.  What's the most challenging thing about being a Filipino writer?

For me, it’s trying to get a larger audience from abroad and getting them interested in our stories. I admire the Japanese and how they turned the medium of comics into something that showcases their culture, which at the same time is beloved by the world. That is my dream for Filipino comics.

8. What are your top 3 recommended books by Filipino authors?

Elmer and Wasted by Gerry Alanguilan

It’s important to create relatable characters and situations for our stories. This is first and foremost. If you’re a young writer, you must resist the temptation of prioritizing the “cool costume” or “cool powers/gadgets/weapons” over a good story - believe me, it just doesn’t work. Instead, sit down and ask yourself, “what do I want my readers to experience?” Your readers will be paying good money for your work so make sure it’s a story they’ll never forget because the sensation of reading it affected them so much.

Right now I’m focusing on finishing “The Children of Bathala” miniseries. This sequel to “The Mythology Class” means a lot to me and I’m very happy that I can share it with a whole new generation of readers.

Grab a copy of The Mythology Class by Arnold Arre and other books authored by Filipinos on Fully Booked Online. Free shipping applies for a minimum order of Php 799 only. Happy reading!