While Amazon Prime confirmed there will be a season 2 of the comedic fantasy drama Good Omens, Neil Gaiman also tweeted that his novel Anansi Boys will be appearing on the small screen.

Gaiman wrote, “I’ve been hinting for, well, over a year now, that there are two big TV shows I’m making. Last month, we announced Good Omens 2. Here’s a clue to what the other one might be…” 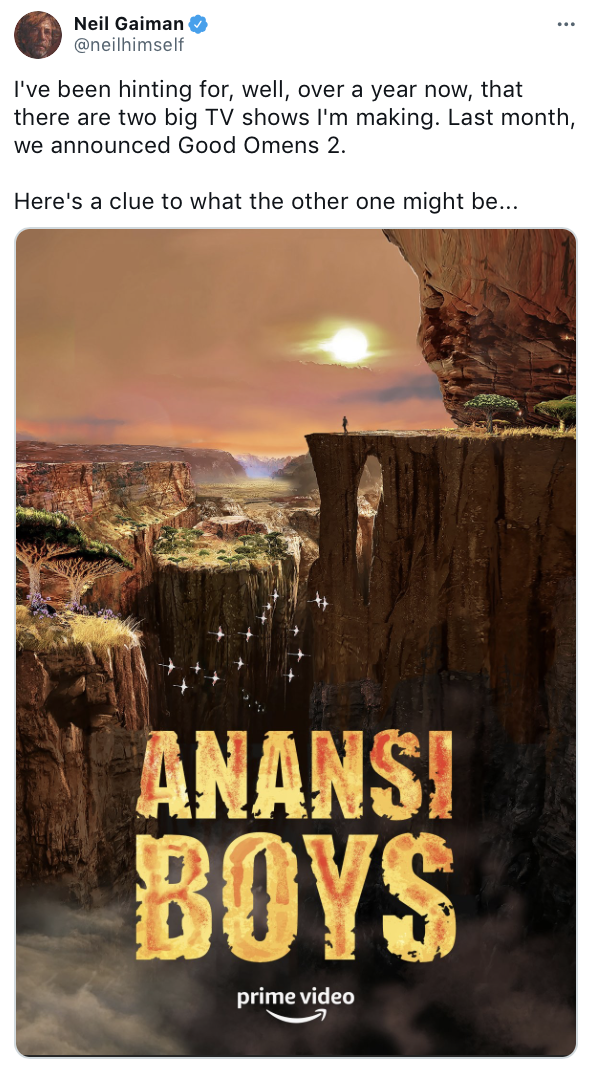 A plan is placed to adapt the book into a limited six-episode series and will start shooting in Scotland later this year according to a report published by Variety.

Anansi Boys is a fantasy novel written by Gaiman and published in 2005. It follows the story of Charlie Nancy, a young man who is usually picked upon and embarrassed by his father, Mr. Nancy—an incarnation of the West African trickster god Anansi.

Amazon Studios, The Blank Corporation, Endor Productions, and RED Production company are working together to produce the show. Currently, Gaiman has an overall deal with Amazon.

Higher Ground and Penguin Random House are set to release the book adaptation of Barack Obama and Bruce Springsteen’s podcast Renegades: Born in the USA on October 26, 2021.

As reported by The Los Angeles Times, it is billed as "a collection of candid, intimate, and entertaining conversations between the former president and veteran rocker."

WATCH: Book trailer of Renegades: Born in the USA

The 320-page coffee book table will include more than 350 photographs and illustrations, as well as historical documents: handwritten copies of Springsteen’s song lyrics and annotated Obama speeches.

According to the trailer, the book will "explore the mythology of America, the music and dreams that unite us, the contradictions that divide us, the lure of the open road, and the call back home."

The best-selling author of Tuesdays with Morrie is back with another novel that is awaiting to capture the hearts of readers from all ages.

For the first time in his fiction, Albom ponders what we would do if God actually appeared before us—Stranger in the Lifeboat is a fast-paced and compelling novel about hope and faith that will make bookworms think about their deepest beliefs.

Stranger in the Lifeboat is a novel that suggests: the answers to our prayers may be found where it is least expected to be seen.

The book will be released on November 2, 2021. You may now pre-order a copy of this book on Fully Booked.